Everything we see around us becomes a reality thanks to our brains. When you are sending out an email, the subscriber’s brain is where the action takes place. We normally don’t think about which part of the brain is activated by our emails. But luckily there is a science to it.
Smart businesses are now looking into the field of psychology and Neuro Marketing. We are starting to gain some insights into how our brains are wired and how branding and marketing work on the cerebral level.

What does this mean for our email marketing strategy?

Our brain turns what we see, hear, smell, feel, and think into reality. Our reality is our own perception. Our personal observations and outlook onto the world defines how we react to impulses. The glass is half full, the glass is half empty, that is a cup – not a glass! Or people might even say the glass is empty (Oh, I didn’t see there was something in there).

Our brain uses shortcuts and associations to quickly classify and group the impressions it gets. When does something look like quality? When is something fun? When is something expensive or cheap? The way we look at the world has a lot to do with our previous experiences and value system. It is merged into a perception.

That perception is affecting your brand and how the way people will react to your emails.

For example. there is a lot to say about survey emails. What you will use them for,  what the reason is that you are doing them, and incentives you are willing to give. Taking all those internal considerations into account, a brand is still free to shape their message as they see fit. Quickly look at this survey email by Levi’s (don’t read).

This email, like every email, sends signals to our brain. What is the vibe you are getting? Is it for people that are happy with the brand and products? Are they really interested to hear from you? Now read the text. What do the words “opinion” and “honest point of view“ communicate? It says it is a simple survey, I am not getting that based on this design.

Most of the time we are not rational, instead we rationalise our preconceptions.  A subscriber already made up its mind if he is going to click and partake or not, then afterwards explains reasons and motivations. This all happens in the blink of an eye.

Forcing yourself to think about the impression people get does matter to the marketer though. I would definitely test the imagery and headline of  this email. There are enough survey email examples and variations available for inspiration. 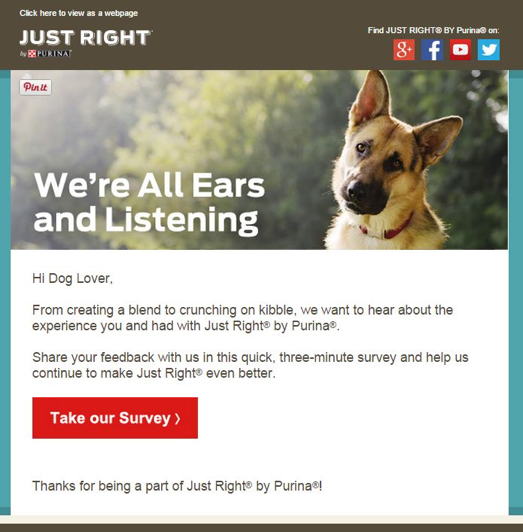 Now a real dog-lover would almost do anything when presented with that picture!

We have to account for people’s perception pre-rationalisation. To put it bluntly, only “stating the facts” is not enough. We need to recognise how they look and would appear to the recipient. This includes design, this includes how copy is written, this includes recognising the frame of mind someone is in. What will he / she react to, what are the stimulants for email engagement with your subscriber?

“Just stating the facts isn’t enough – and that is a fact.”

But if you do want to make a rational appeal… remember:

1. Seduce in the evening, explain in the morning.

During the day our energy levels start to deplete and with that our ability to access the rational part of the brain, the rational part requires focus and energy. So emails with products that a bit more complex or require explanation are best sent in the morning when people are rested and sharp. This doesn’t mean, that you should introduce clutter in the morning.

2. Our buying brain works on emo-pilot.

If you want to appeal to the emotional side of the brain, evenings might be best. People will take the easy choice when their energy is depleted. Because our brain is constantly on emo-pilot. The emotional part of the brain, the non-rational part is always on autopilot. And it becomes more prevalent once the day progresses and our energy levels drop. If you stimulate impulse purchases, the evening and the end of the workweek are the times to do it.

People will more easily choose the more seductive but less good choice, like choosing cake versus fruit – that is a delicious treat for seductive marketeers in the evening. And there is proof to that, as this article from the Wall Street Journal shows:

In an experiment at Stanford University, several dozen undergraduates were divided into two groups. One group was given a two-digit number to remember, while the second group was given a seven-digit number. Then they were told to walk down the hall, where they were presented with two different snack options: a slice of chocolate cake or a bowl of fruit salad.

The students with seven digits to remember were nearly twice as likely to choose the cake as students given two digits. The reason is that those extra numbers took up valuable space in the brain—they were a “cognitive load”—making it that much harder to resist a decadent dessert. In other words, willpower is so weak, and the prefrontal cortex is so overtaxed, that all it takes is five extra bits of information before the brain starts to give in to temptation.

Don’t discard tactics because you think they won’t work

The emotional (system 1) part of the brains works automatically, nothing we can do about it. Take the adage “Sex sells”. We all know it, we don’t always want to admit it, but still sex sells. The lizard brain, system 1 is always on. So marketers rationalising (system 2!) that some persuasion tactics wouldn’t work because “everybody knows how they are trying to fool you” just isn’t the case. There is no way around system 1.

Priming works on the brain as well. An example is From / for pricing. It builds a frame of reference in which we compare prices. The first number in our brain acts as comparison material for references. You say it doesn’t work? That people know that  the “from” prices aren’t actually real prices? Yes, the products might have never actually been offered for those prices. But humans are irrational, easily distracted and contain centuries of evolutionary wiring.

So don’t discard these techniques because you think they won’t work. Test it. And remember, you are always emailing a brain. Share your thoughts with us in the comments below! We’d love to hear what you think about neuromarketing (AND check out our interview with a neuromarketing wizard – Tim Ash)