Snapchat? Isn’t that the network that teenagers use to send each pictures of their bits? Well, apparently it is – plus for a whole host of not-quite-so-lewd reasons I’m sure. But, it is most definitely true that Snapchat is the network for the younger generation.

Let’s turn to good old Statista.com for some numbers:

Distribution of Snapchat users worldwide as of 2nd quarter 2015, by age 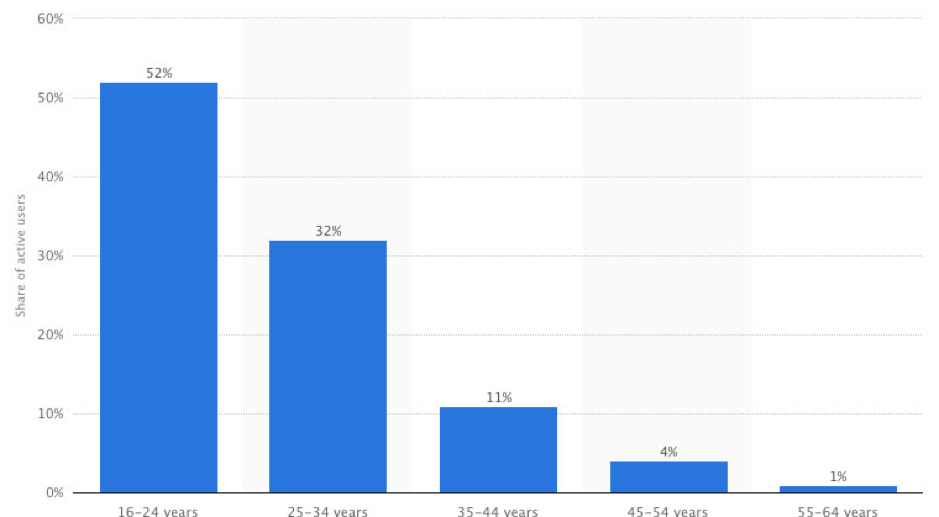 “This statistic provides information on the distribution of Snapchat users worldwide as of the second quarter of 2015, sorted by age group. During the survey period it was found that 52 percent of global Snapchat users were aged between 16 and 24 years.” (Source: Statista.com)

Ok, so it’s pretty clear that Snapchat finds its target audience amongst millennials. But let’s narrow that down even further.

Well, last year, businessofapps.com gathered up some of the most relevant and accurate information from around the web that answers this very question – here’re some key takeaways:

Only 1% OF Advertisers? Really? 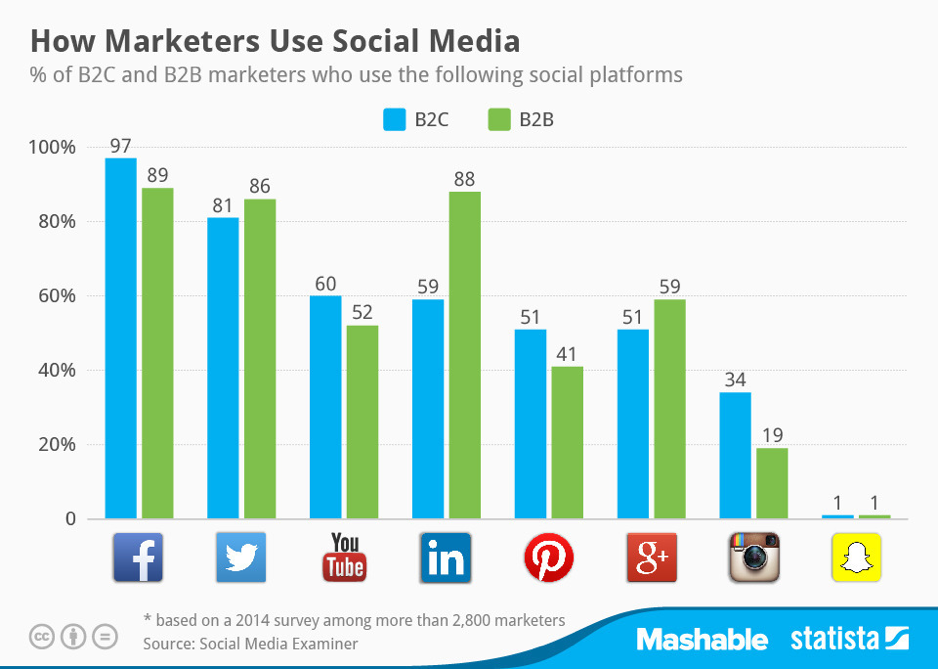 Yes, I want to highlight this point. For it does seem bizarre. Snapchat is huge. It might not be huge amongst ‘adults’, if you like, but it’s nonetheless massive. Indeed, according to an International Business Times Report, Snapchat gets 4 billion views every single day. Which, as it happens, is exactly the same amount as Facebook.

That’s right – the same amount of daily views as Facebook.

So why are only 1% of marketers making use of the platform for their advertising purposes?

An Exclusive Club For Youngsters Only

I suspect that the reason behind the slow marketing uptake for Snapchat marketing is because marketers tend to be boring old grown-ups who, despite priding themselves to be ‘with it’ when it comes to things like Facebook and (yawn) LinkedIn – they wouldn’t have Scooby what to do with Snapchat.

Indeed – and let’s face facts here – Facebook, with its 1.59 billion users, is now not only crawling with parents, but even grandparents to boot. Hardly the place where a young person would want to be spilling the real beans on what they’re actually up to after hours on a Friday and Saturday night.

And the figures speak for themselves on this front. Interestingly, according to a study carried out by Sumpto, 77% of college students post on Snapchat at least once a day. This number drops dramatically to just 11% when quizzed about Facebook.

So the question really has to be – if you’ve got a service or a product that appeals to the younger demographics, then why on Earth aren’t you tapping into this massively fecund database of eager young Snapchat users who are paying more attention here than they are on Facebook?

Here’s an infographic from Sumpto, published in Business Insider, that shows just how college students are using Snapchat.

3 Cool Ways To Use Snapchat For Business

So, like the parent that I am, I’ve chosen the title for this blog post with particular focus on the adjective – 3 COOL Ways To Use Snapchat For Business.

Now, being cool is important. It was important when I was a teenager, and it’s still important to teenagers today. The meaning hasn’t changed, although I have no doubt that the criteria and qualifications have. And so, I don’t mind admitting that the five “cool” suggestions that I make below might not be “cool” enough to actually engage your particular audience. And I want you to bear that in mind when you read through them. For, although these suggestions are sound, you may well need to use a bit of your own innovation to tweak them as you deem appropriate to fit in with whatever’s currently “cool” in your network.

Are you ready, daddio? Cool beans. Let’s rock it!

The disappearing nature of content on Snapchat lends itself brilliantly to limited editions or offers of products that you may have to advertise.

In case you are unfamiliar with the lifetime of ‘snaps’ on Snapchat, here’s how they work…

The ‘snaps’ that you send to your followers can only be viewed for 10 seconds by users – whether they’re videos or static images. After this time has elapsed, the content ‘self-destructs’.

Alternatively, you can add a ‘snap’ to your ‘story’, which is a collection of your content that dates back a whole 24 hours, after which time it all disappears into the internet ether never to be seen again.

So, with this in mind, you can actually use Snapchat’s very USB to illustrate that if users don’t take immediate action to buy up a limited line or offer that you have for sale, then it will quickly disappear for real.

Did you read my posts here about hashtag marketing and reactive marketing? Well, I’d encourage you to do so, because you can actually use Snapchat to nail both of these marketing methods.

And this indeed is something that Audi did during Super Bowl 2014, after partnering up with The Onion its marketing team Huge.

“The idea for the Snapchat activation was simple: authentically connect and entertain the Millennial demographic through platform-relevant content to drive online buzz. Our mission was to generate public online conversation through raw, privately-distributed, humorous content to stay above the fray of overly-produced marketing messages flooding users’ Twitter feeds.” (hugeinc.com)

They achieved this by creating humorous photos and captions that mimicked people’s typical behaviour – or their pet’s – when watching the Super Bowl. This was a massive success, growing Audi’s Snapchat following by more than 5,500 followers during the game alone, and indeed landing some great exposure on Twitter to boot. 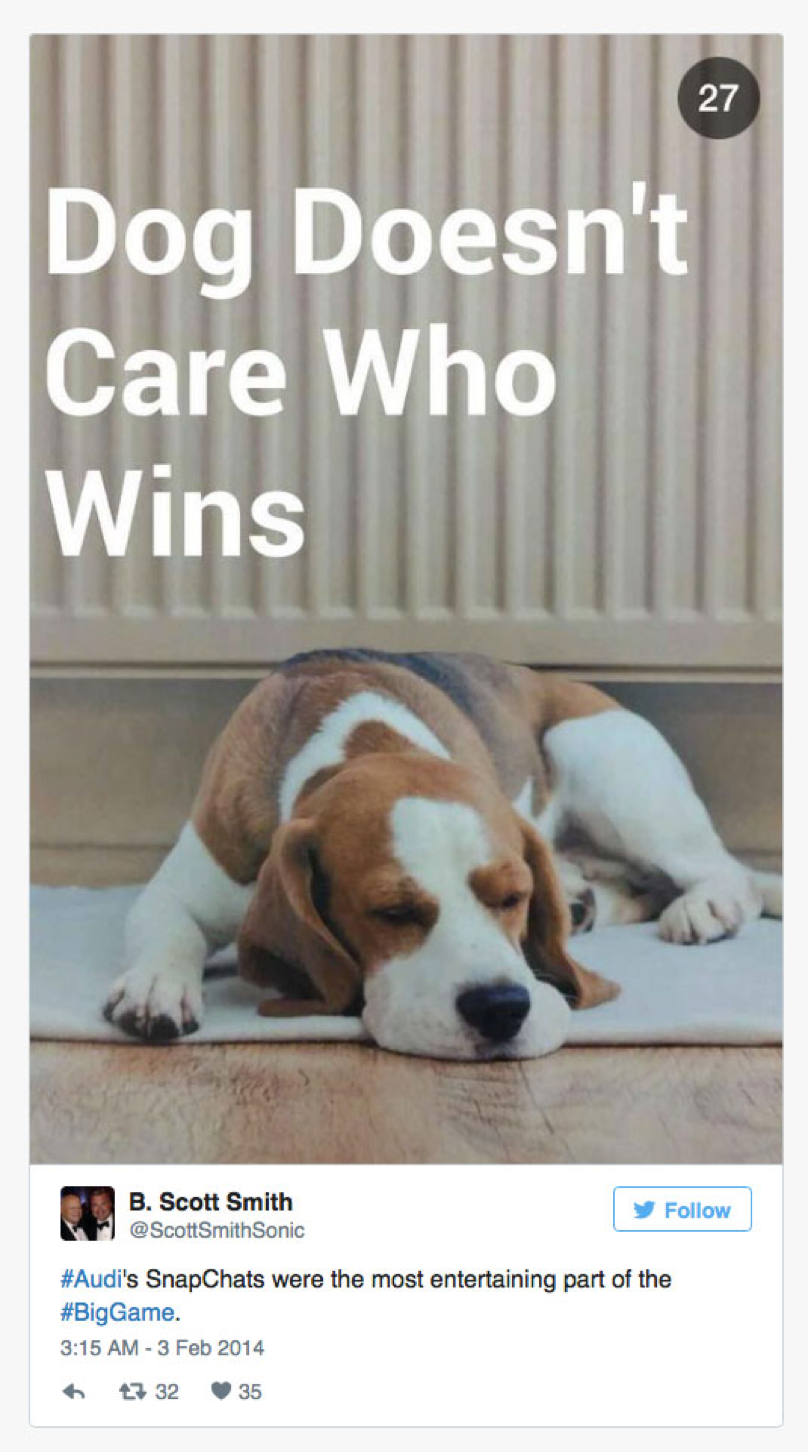 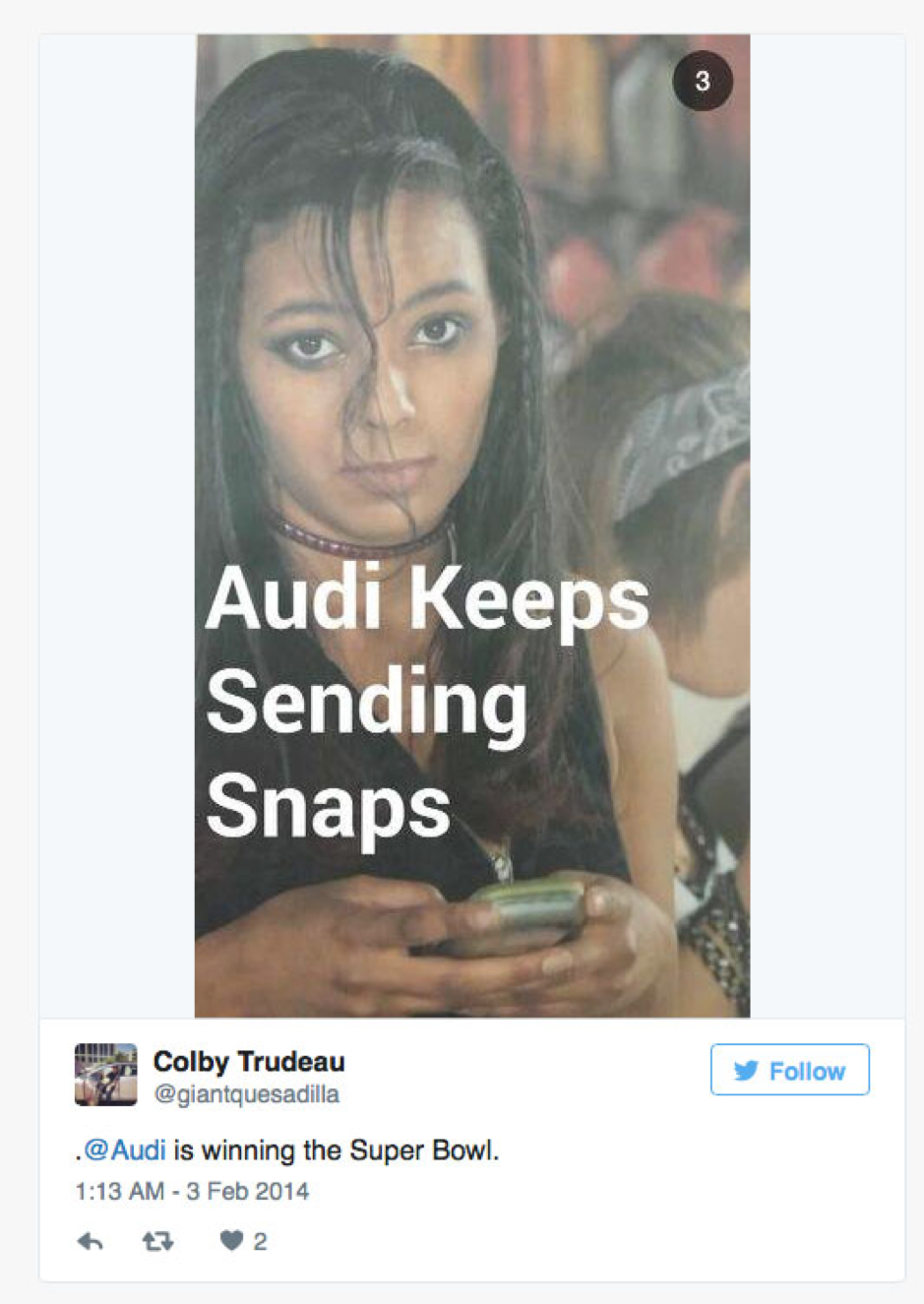 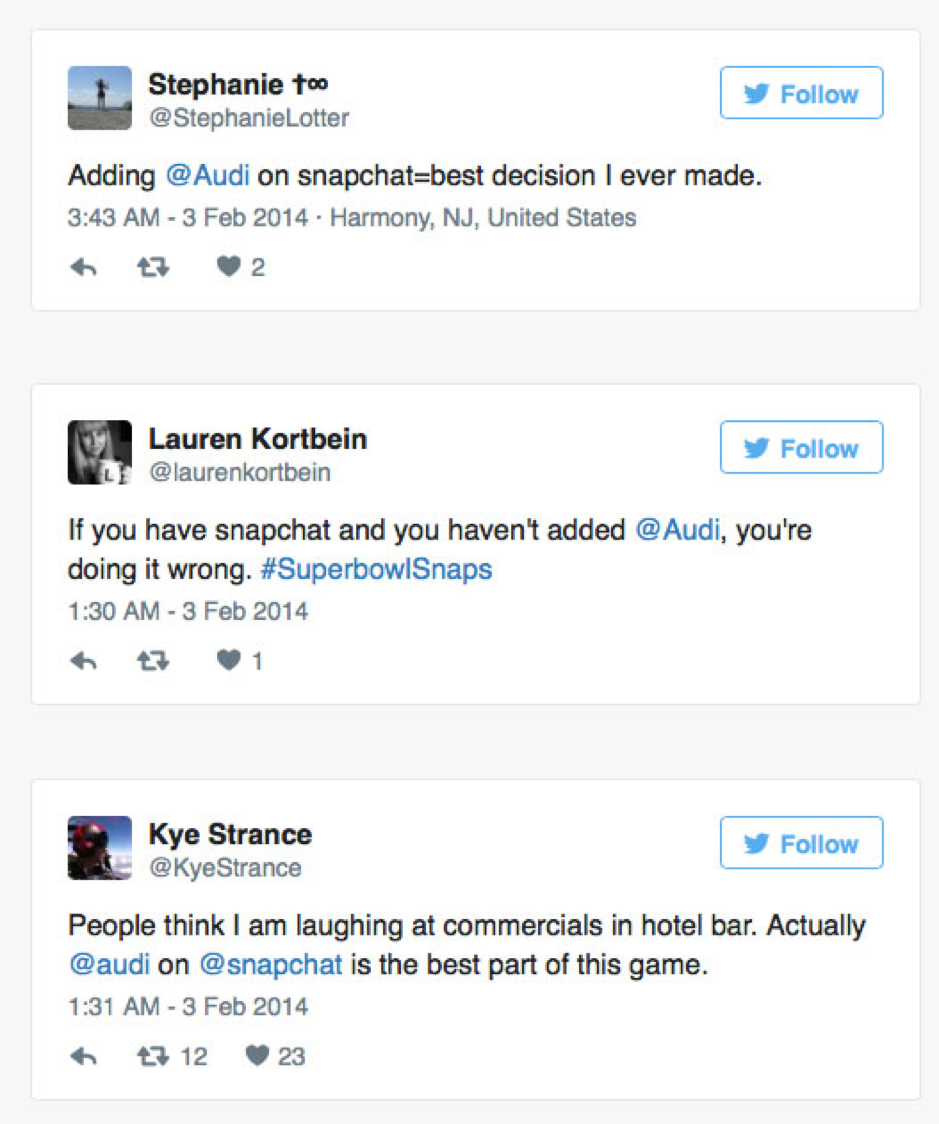 One of the most successful brands on Snapchat is of course Taco Bell. According to AdWeek.com:

“Taco Bell’s Nicholas Tran said Snapchat followers are ‘crazy engaged.’ When the brand sends a Snap, 90 percent of friends who open a message view it in its entirety, and these can be five-minute-long digital photo-video collages, he added.”

This is an engagement rate that’s pretty much unrivalled, it has to be said, in any other marketing method, be it Twitter or email. Why is the brand so successful? Well, it’s because it gets Snapchat and uses the language of its followers (it’s “cool”, in other words). 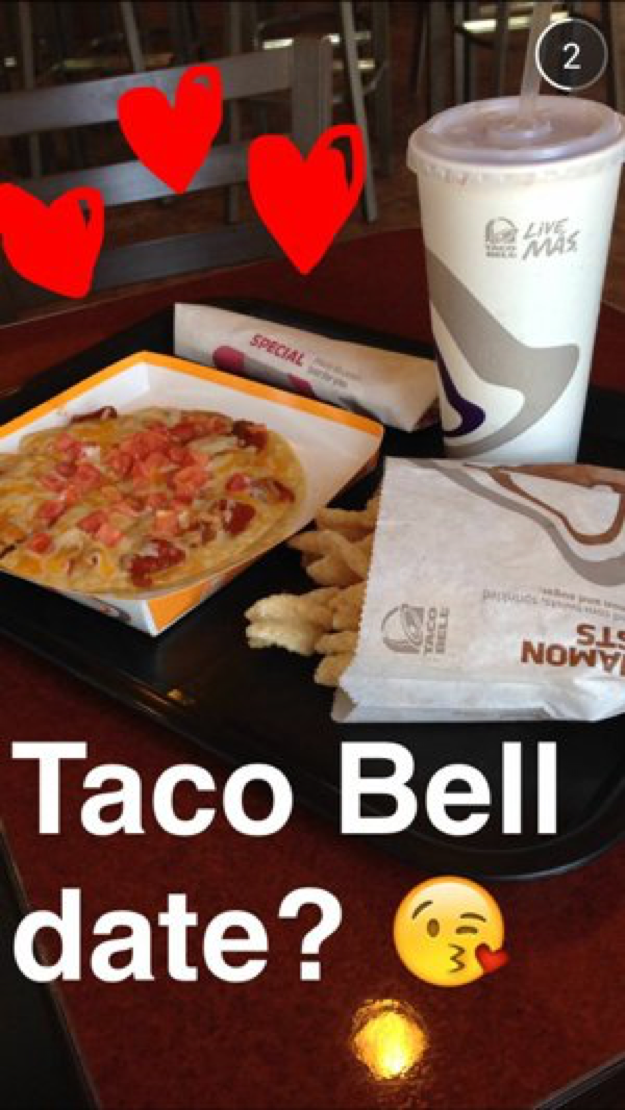 In the example that AdWeek uses, you can see how it’s not just plain photographs, but the team makes use of the available typography and the ability to doodle and add emoji that really livens up the whole snap. It’s fun, it’s cute, it’s entertaining, it’s cool – but perhaps most of all, it’s simple. And perhaps when all’s said in done, the simplicity and brevity of Snapchat itself is what most likely attracts the youngsters – and maybe it’s this that accumulates to being cool in 2016.

Have you got what it takes to hang with the cool kids on Snapchat? Let us know how you go about approaching the platform in the comments below.