Facebook marketing gets more complicated all the time. A few years ago, all you had to worry about was getting likes. Then likes became less meaningful. Organic reach became the goal.

Organic reach fell off around 2014, when Facebook did its famous switcheroo and knocked organic reach down to single digits for most publishers. Now, two years later, most smart marketers have zeroed in on engagement rates – the measurement of how many likes, shares and comments each post gets.

Obviously, engagement matters because it means your audience is interacting with your content. That keeps your company top of mind, so your followers are more likely to think of you when they need your services.

To help you get more engagement for everything you publish on the biggest social network, we’ve rounded up some recent research on what works best for improving engagement rates on Facebook. All the data here is less than six months old.

I hope when you finish this article you’ll have picked up several tips to get more mileage out of everything you publish on Facebook. Best of all, none of these tactics costs any money. None of them require advanced Facebook skills. They’re just simple hacks proven to get you more results.

Let’s start with the biggest study first. Earlier this month, the folks over at BuzzSumo published another one of their massive research projects – an analysis of over a billion Facebook posts across 30 million brand pages. If that isn’t a big enough pool of data to draw from, I don’t know what is.

Here’s the summary of what they found, with the charts to back it up:

1) The best time to post is between 10 PM and midnight in your audience’s local time.

That’s the official information from BuzzSumo, but when you look at the graph of their data, you can see there’s a bit more to the story 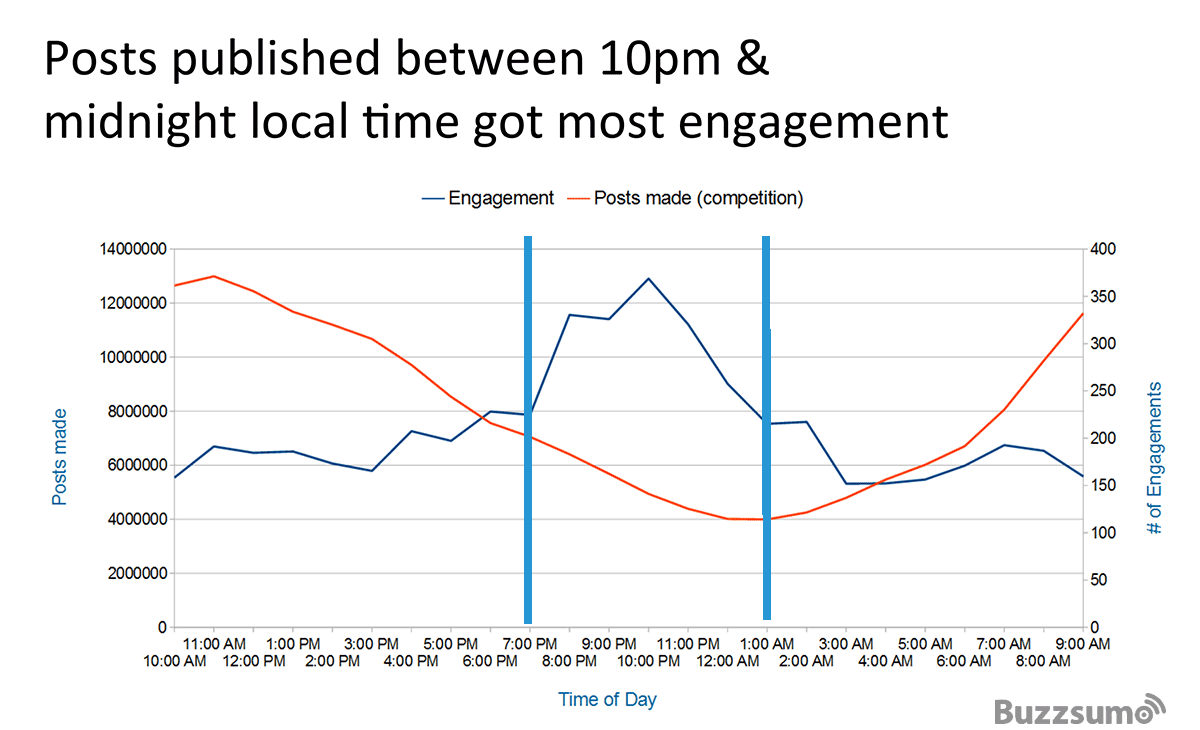 It’s not that 10pm and midnight aren’t good times – they most certainly are. But the entire time slot from 7 pm to 1 am does better than average (that’s the section between the two blue lines).

Any time within those hours is a good time to post, and actually, even an hour before and after the two blue lines would perform a bit better than average. The results spike even higher if we look at the very peak of the engagement rates, from 8 pm until about 11 pm. 10 pm – the highest spot on the chart – is the very best time to post.

And Saturday posts do nearly as well. So why are weekends such good times to post? Competition. Fewer posts overall are published on weekends, so you’re competing with fewer posts for your audience’s attention. 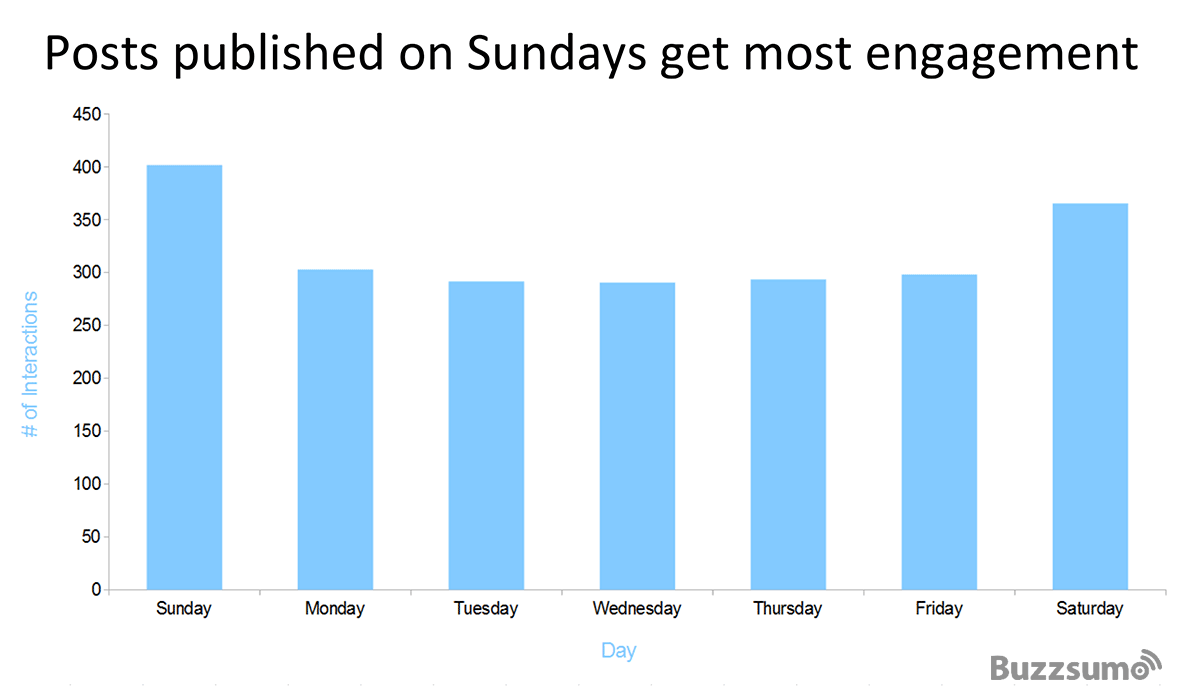 This same principle applies to email marketing, and pretty much every other publishing platform. It’s best to publish when other companies are mostly quiet. Even if you’ll reach fewer members of your audience, the lift you’ll get from the reduced competition will more than make up the difference.

3) Question and image-based posts get the most engagement. 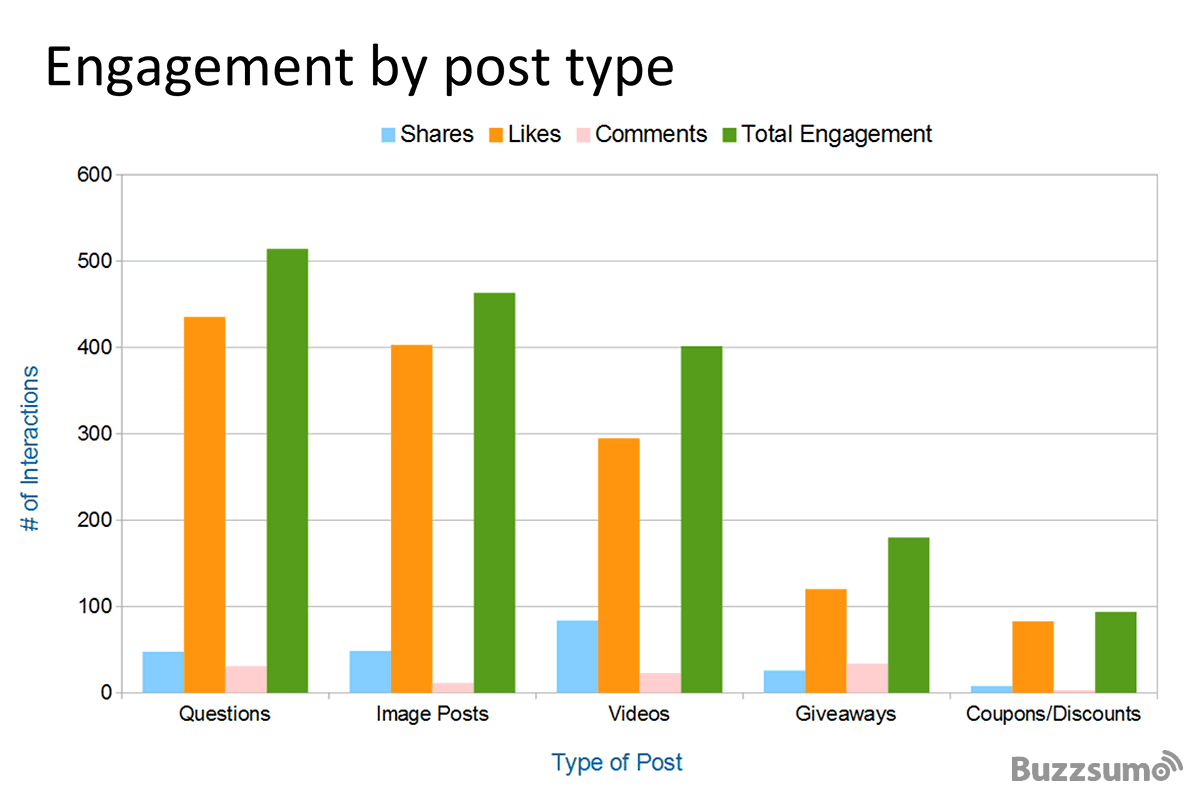 The BuzzSumo data actually saw even higher engagement rates than what you see here. The higher rates were specifically for posts that used an image and a question together. If you can come up with a few posts like that, it would be interesting to see if you can duplicate these results. Try a couple variations to see what works best for your audience.

Here’s an example of a question and image post from the clothing retailer LL Bean: 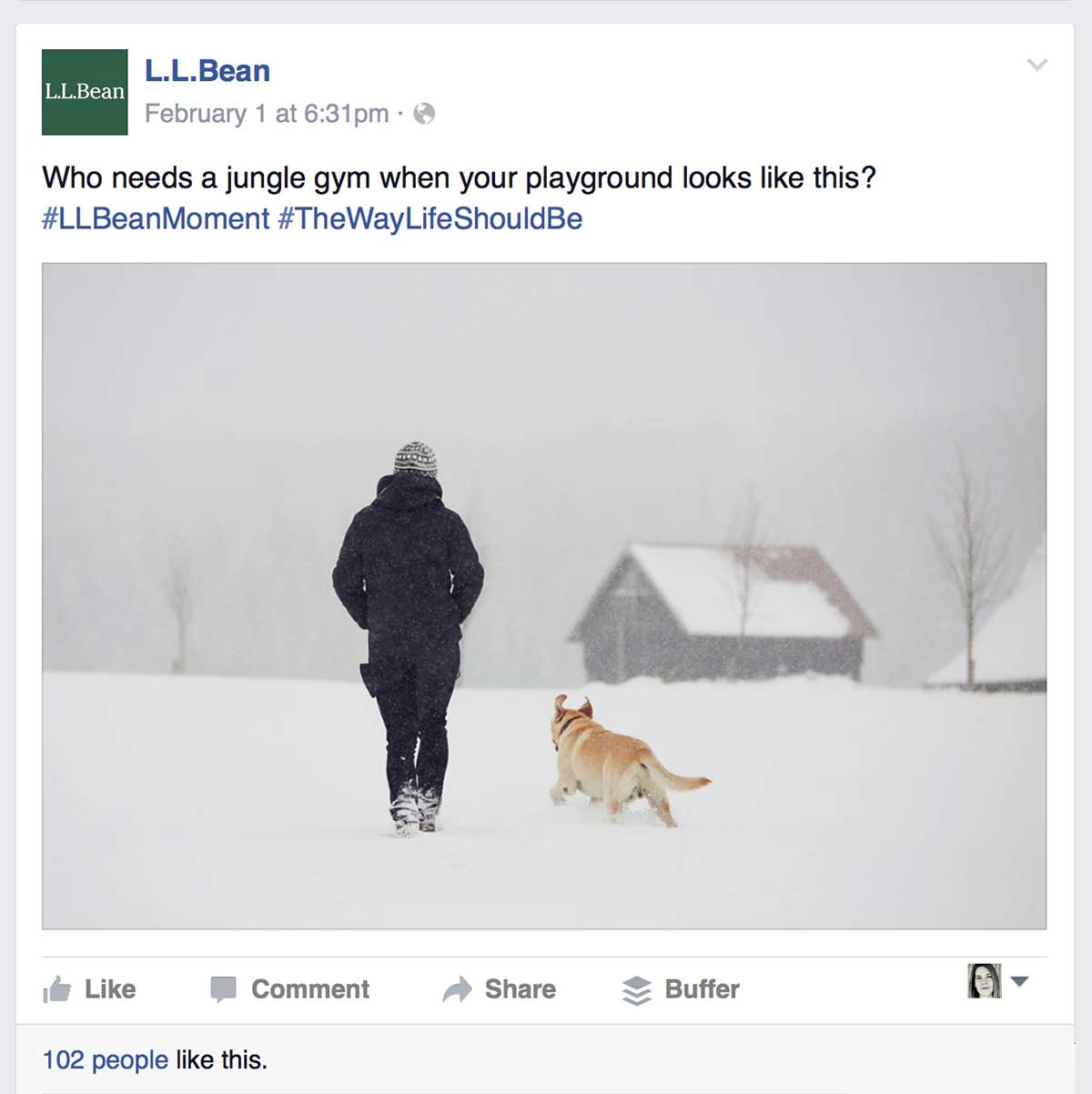 And another one from Mellow Mushroom, a pizza chain out of Atlanta, Georgia: 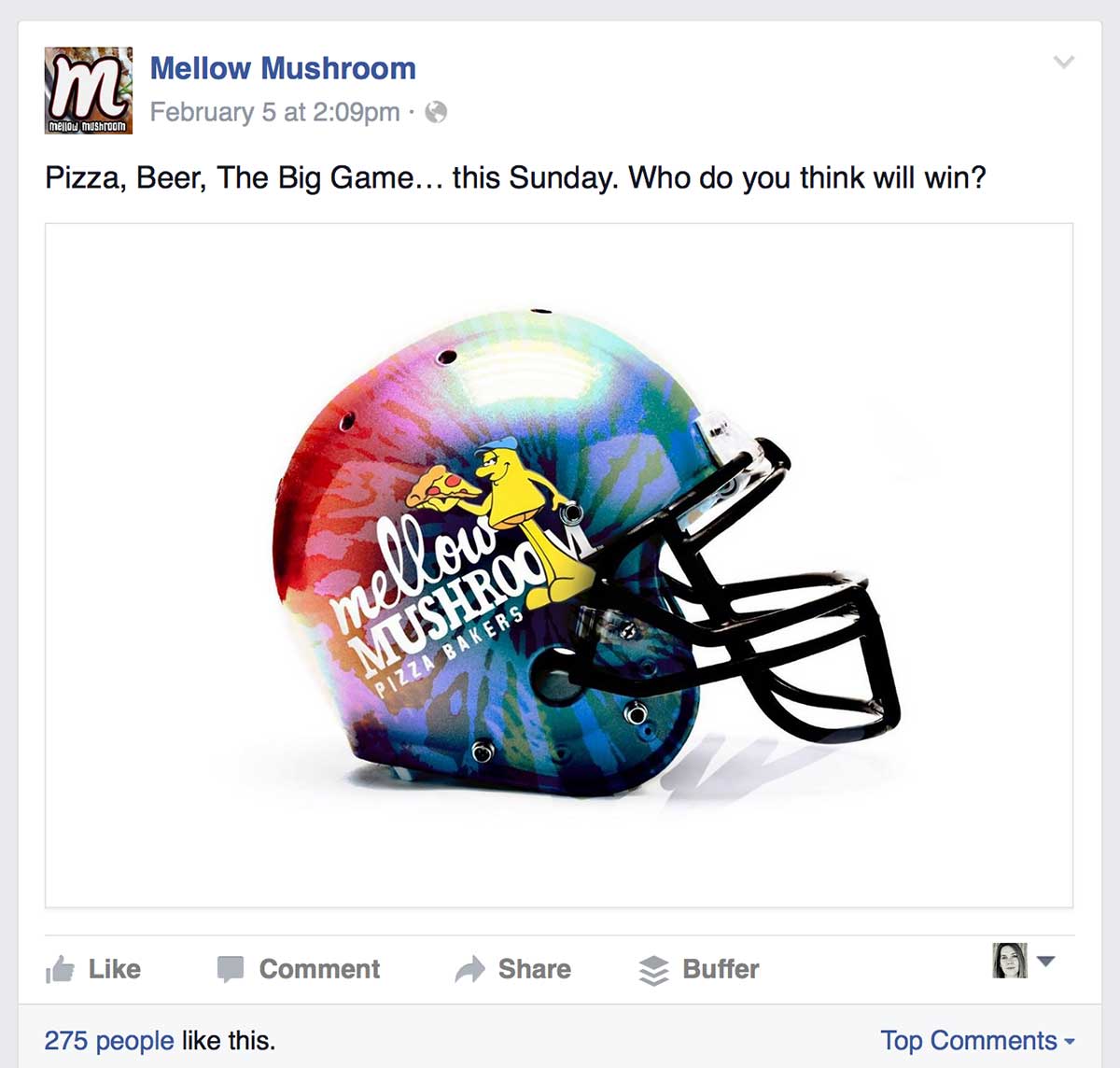 One more thing about this chart – about how poorly coupons and discounts did. If you’ve been trying to get more engagement via coupons, discounts and giveaways, this study suggests it might be time to stop. But I’m not entirely sure about that. There’s a lot of data that shows people follow brands and businesses on social media to get exactly those kinds of perks.

Here’s a recent chart from MarketingSherpa showing exactly that: 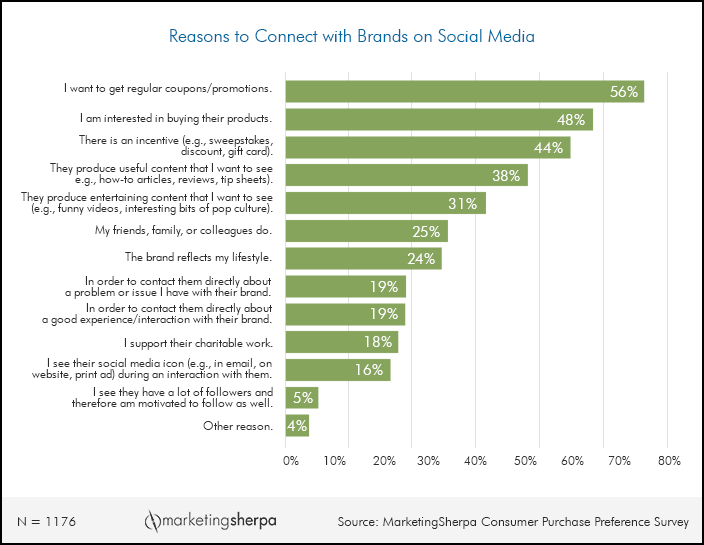 I’m not entirely sure how to reconcile these two pieces of data. I trust what BuzzSumo found, but there’s several surveys showing how people want discounts and coupons.

Could it be that some company pages are just offering too many discounts, and people are getting numb to them (lookin’ at you, GlassesUSA). Or is something else going on here?

4) Short text posts with less than 50 characters get the highest interaction rates. 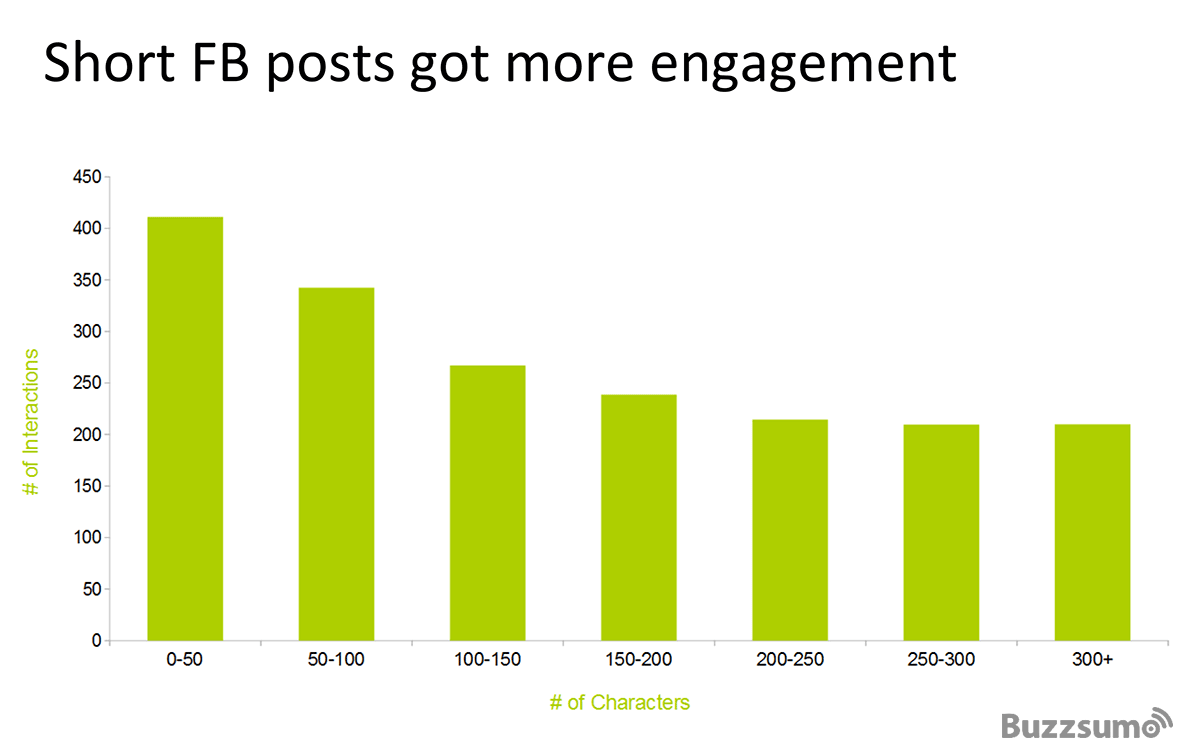 There’s been a slew of studies supporting this finding. Shorter posts have consistently outperformed longer posts for years. One study I found dated all the way back to 2012. It was on Jeff Bullas’ blog, and showed similar results for several of BuzzSumo’s findings.

Back then, Jeff found the sweet spot to be posts with 40 characters. Those got 86% more engagement, though any post with less than 80 characters did well.

This is interesting, because one of the biggest reasons for any company to be on Facebook is to get additional traffic. And boy, can Facebook deliver. Research from Parse.ly shows Facebook actually beating even Google when it comes to driving traffic to websites. If you’re doing content marketing, you could justify a Facebook presence purely to get a slice of that traffic.

This isn’t the only research study to discover that “native” Facebook videos crush embedded YouTube videos. We wrote about it ourselves a couple of months back. 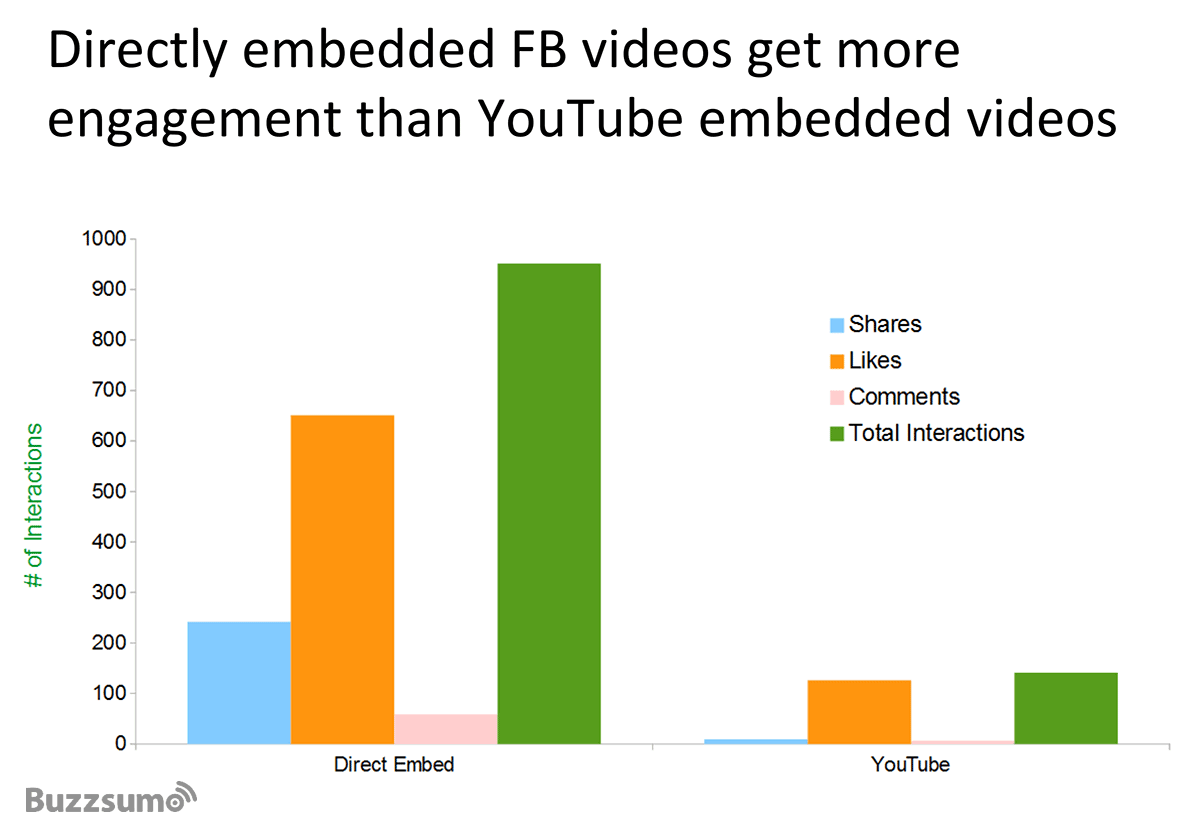 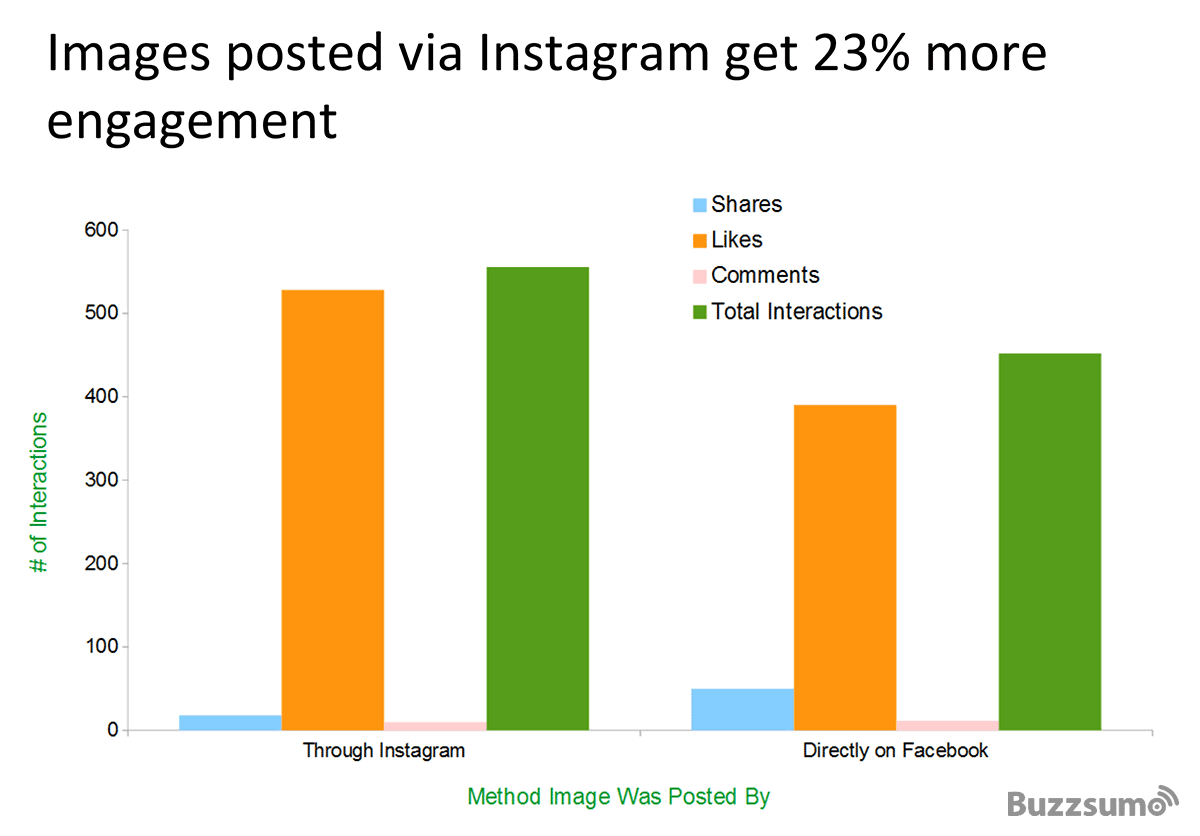 8) Posts without hashtags tend to do better than posts with hashtags.

Uh-oh. If you’ve been posting the same social media updates to Twitter, Google+ and Facebook, it’s time to rethink your strategy. Facebook isn’t anywhere near as hashtag friendly as Twitter (or even Instagram) is. So take the extra time to format your Facebook posts specifically for Facebook. No more cheating and just publishing the same update to all your social accounts. 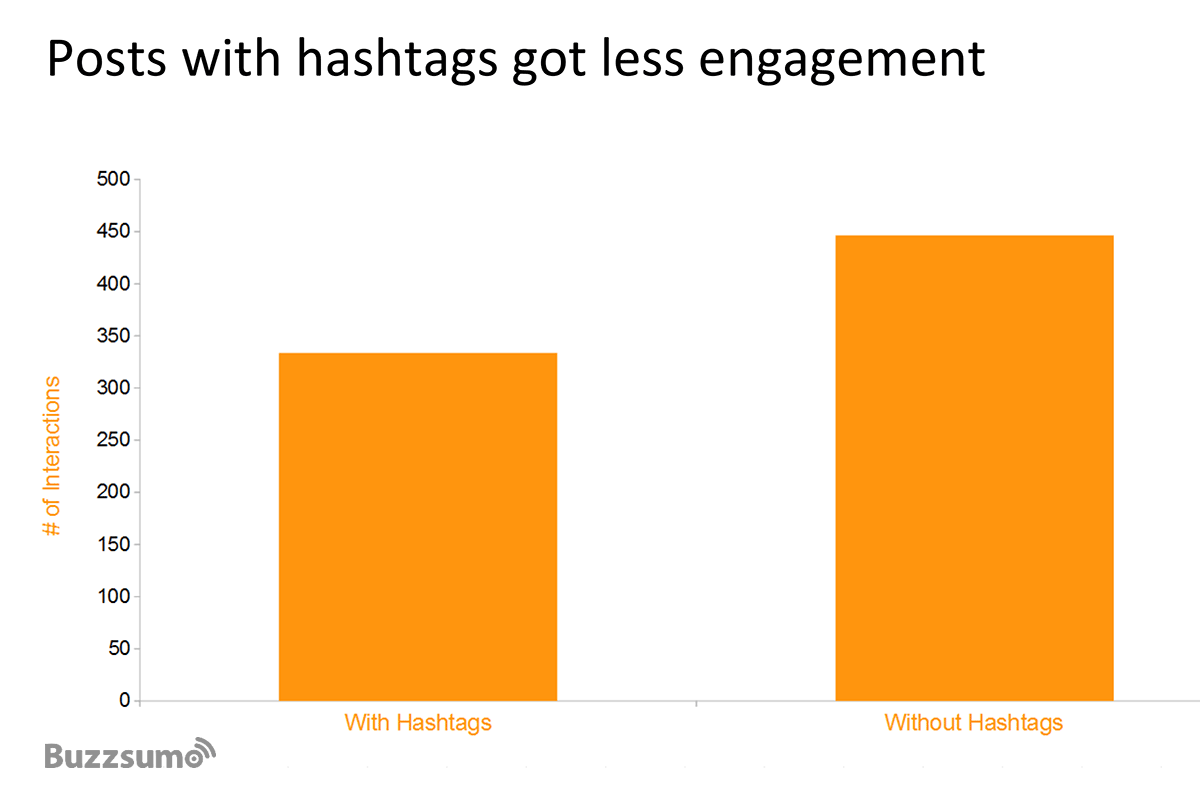 But what about your audience?

As this data is great, but it has one major shortcoming. It doesn’t include your audience on Facebook. If you’d like to see graphs like this outlining how your Facebook engagement rates are faring, head over to BuzzSumo’s Facebook tool, SumoRank. It’s free and will give you detailed engagement reports for any Facebook page. 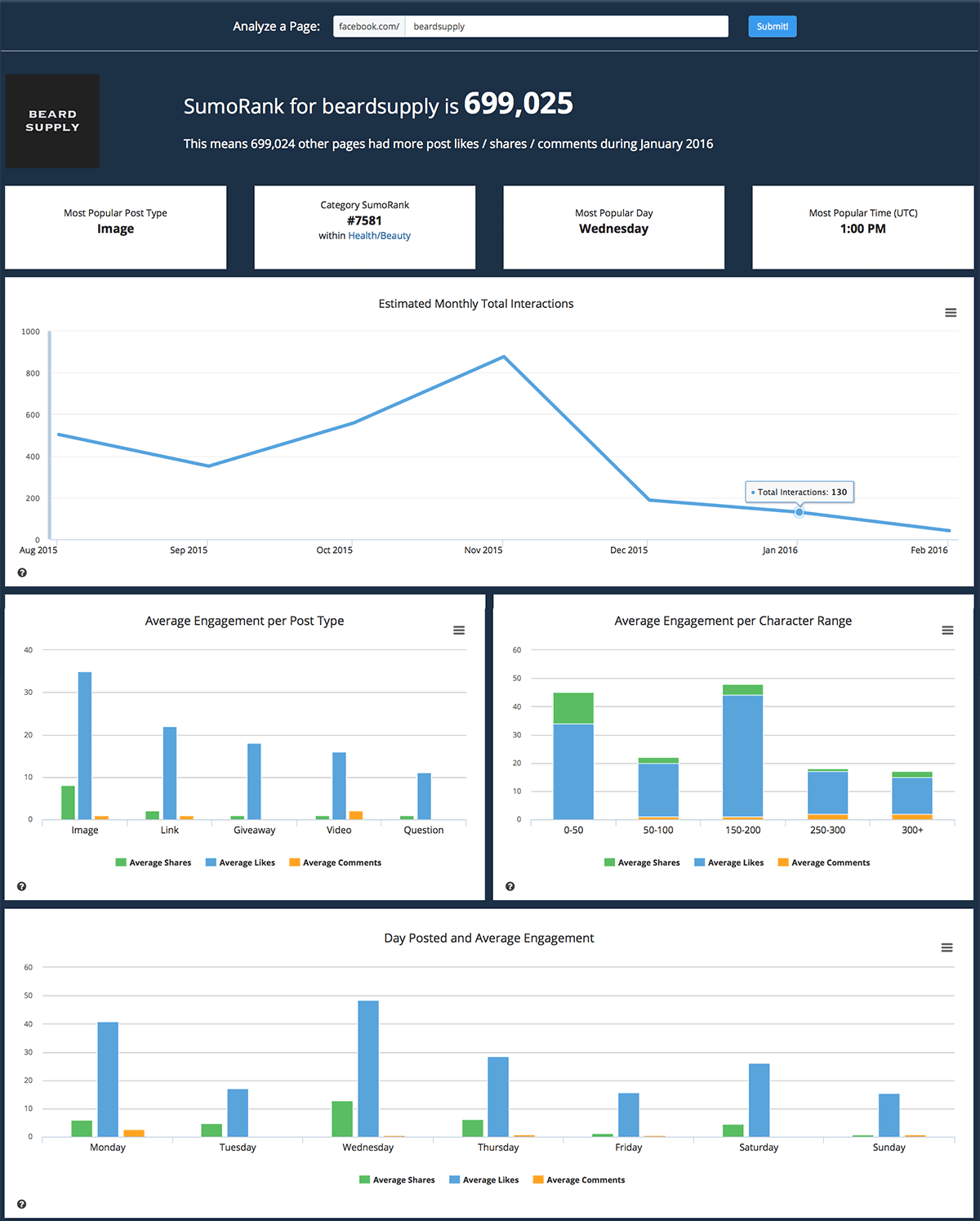 An excerpt of the report from BuzzSumo’s free Facebook engagement tool, SumoRank.

Also check out FanpageKarma. It’s mostly a paid platform, but you can get some information out of it for free. The report below gives you an idea of what information it shows. You can also track companies automatically over time. That’s easier than checking and rechecking via the SumoRank tool.

How are the engagement rates for your Facebook page faring? Are they going up, or going down? Have you found anything that works consistently? Please share your thoughts in the comments!