There’s a sinkhole in your email list building efforts. Nobody talks about it much, but it is definitely there. It’s called “list churn”, “attrition” or “churn rate”. List churn eats up about 25-30% of the average email list every year. Your list growth efforts have to outpace your list’s churn rate. If they don’t, no matter how much list building you do, your email list will stay the same size. It might even get a bit smaller.

Things you should know about email list churn rate:

Before we begin, let me suggest some additional reading. While this article talks about fixing your leaking marketing funnel, this doesn’t mean you should forget about getting more people to enter your funnel in the first place.

That’s exactly what this article is about – email list building.

If you’re looking for effective ways to speed up your list building efforts, make sure to read it later.

What is churn rate?

Churn rate is a percentage of how many subscribers leave your list in a given period of time. And it’s one of the most important email marketing metrics to measure.

There are two flavors of list churn: transparent churn and opaque churn. Just so we’re all clear (sorry), here’s how they’re different:

People can stop seeing your emails for two reasons:

That last point illuminates an issue that doesn’t get talked about enough in email marketing: You subscribers have more than one email address.

In fact, depending on which marketing study you cite, the average email user has between three and five different email accounts. These multiple email accounts are used somewhat like folders, in that people use them to prioritize their emails. Typically at least one account is a bulk email account that’s used for low priority emails. Then there’s also a work account and a personal account.

List churn eats up roughly 25%-30% of your list every year. According to Loren MacDonald, writing for MediaPost “While transparent churn rates can vary widely, typical annual rates are between 25% and 50%. Opaque churn rates are probably between 10% and 25% annually for most brands.”

So when you look at a chart like this, from Ascend2’s “Email List Growth Survey Summary Report”, don’t think these email marketers are getting so-so results from their list growth just because they’re lazy. They aren’t. If an email marketer is not seeing significant list growth, it’s usually because they have to add more than 25-30% of their list in new subscribers every year just to stay ahead of the effects of list churn. 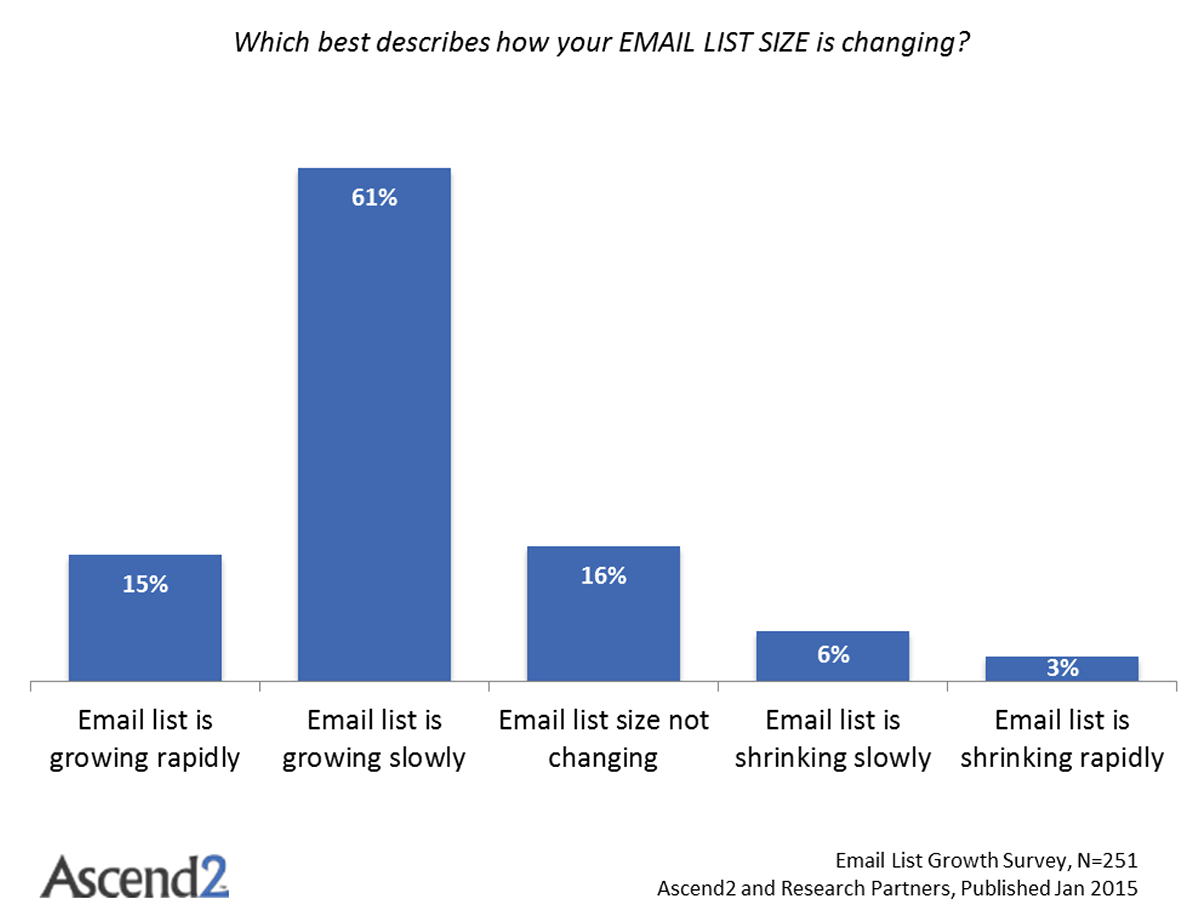 How do I figure out what my list’s churn rate is?

There’s no one way to calculate list churn. And because it’s not a widely discussed topic, there’s not much information available about how to calculate list churn. But that doesn’t mean you can’t. Basically, all you have to do is to pick a time frame, tally up the people you’ve lost, and then divide by the size of your list. The formula would look like this:

That’s a start. To make your calculation easier, pick an annual churn rate rather than trying to figure it out month to month. That means you’ll need to run a report for the last year’s worth of unsubscribes, hard and soft bounces and spam complaints. Then use the list size you have on the day you’re calculating your list churn rate. Don’t use the count of your list size from a year ago.

That will give you a transparent churn rate, which is all most people calculate. But it doesn’t include the opaque churn, aka “involuntary churn”. Those are the people who just aren’t responding to your emails anymore, or who may not even be seeing your emails anymore.

Calculating opaque list churn is much more of a guessing game. Just to give you a starting point to work from, though, I’m going to give you an example of how you might want to approach it. If you’ve got a better technique, please do let me know about it in the comments.

If you know your inbox placement rate (ie, what percent of your emails are actually reaching the inbox), you’ll know the first component of your opaque churn counts. In other words, you’ll know how many people on your list aren’t seeing your emails. For the rest of your list, you could see what proportion of your list has not opened or clicked on your emails in the last year. Then add up your 12-month inactives plus how many emails aren’t even getting to the inbox. That will give you a rough count of the opaque churn.

Want another view on how to calculate list churn? See marketing consultant Linda Schumacher’s blog post (Editor’s note: the blog post the author’s referring to has recently been taken down) about how she calculated her email list churn for the last few years. Schumacher used a different technique for calculating her list’s churn rate, but it’s a good technique, too. It also illustrates how there’s no one agreed-upon way to calculate list churn. The table below shows the results Schumacher got after she finished her calculations.

How do I reduce my list’s churn rate?

Now that you’ve got a rough percentage for your own list’s churn rate (or you know how to get it), what can be done to reduce it? Plenty. Here’s an actionable to do list for stomping out high list churn rates and reclaiming your email list growth:

1) Give people an option to “opt-down” rather than just unsubscribe.

To use automation rules to create an opt-down feature, let’s say you send an email newsletter out once a week. If you want to offer your subscribers a way to reduce how many emails they get from you (instead of just unsubscribing), so you create a campaign for people who only want an email, say, twice a month. Then you set up an automation rule so that when people click a link in the footer of your emails, they are automatically passed to the new campaign that only gets mailed to twice a month. The link might say something like: “Getting too many emails from us? Click here to get only two per month.”

2) Segment your list so you can send more relevant emails to your subscribers.

Some of your subscribers may be leaving because their interests aren’t being served. So try segmenting your list into 2-5 sub-lists according to subscribers’ major interest groups. You can also segment your list based on how subscribers behave. It would work a bit like the automation rule above.

We recently published an infographic on how to make email messages more engaging. Marya Jan also wrote a great piece awhile back about how to create engaging content for your website and blog. Add some of those tips to what you’re already doing.

Sometimes it works, sometimes it doesn’t. But this post will show you how to find out if your list would benefit from personalization.

Win back the emotionally unsubscribed by sending them something unbelievably good. A 30% off coupon, a free ebook that usually costs $25, or even a free 30 minute phone consultation would all work. Whatever your incentive is, make it special and use a subject line that lets people know how great it is.

For more tips on re-engagement campaigns, see Reactivating Your Subscribers: A Step-by-Step Guide by Michal Leszczynski.

6) Find out what content your subscribers really want by sending out a survey.

There’s a recent post about how to do that here. Don’t miss the part about the survey GetResponse has automatically been asking your subscribers when they unsubscribe. The results of that survey are already in your GetResponse account under “Statistics” > “Email Analytics” > “Newsletter”. Click the “Unsubscribed” tab on that page to see your list’s survey results. 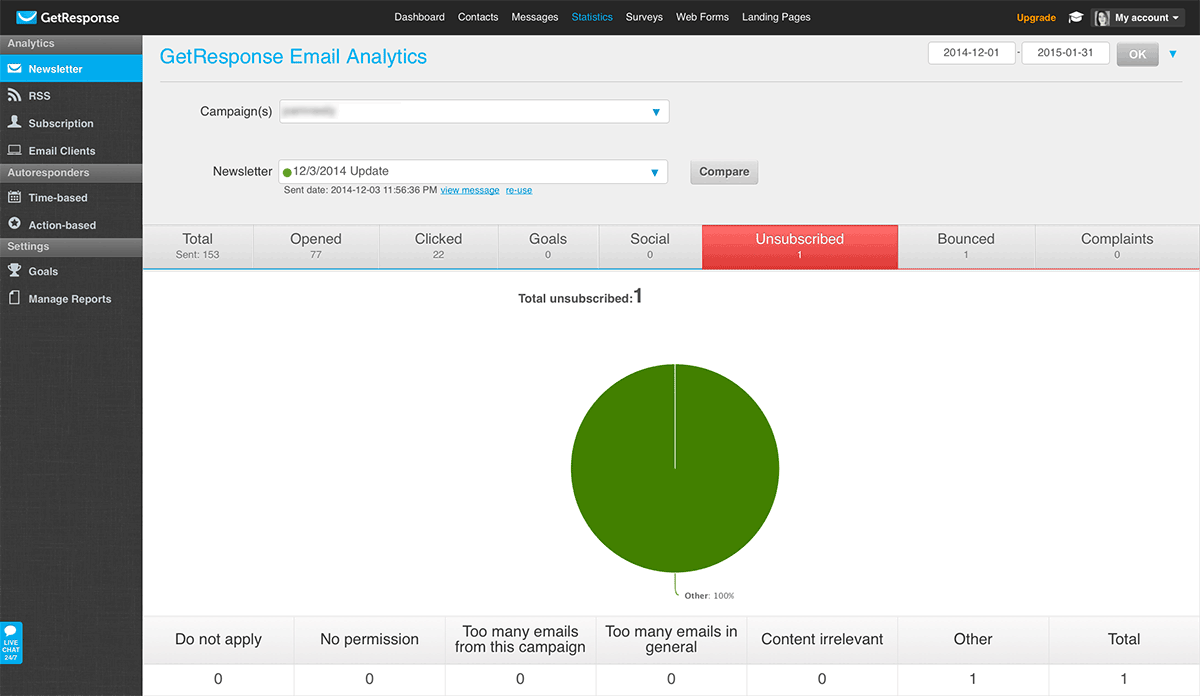 That report might lend some clues on why people are leaving.

7) Consider using double opt-in, if you aren’t using it already.

Though double opt-in does require an extra step (people have to click a link in a confirmation email before they are subscribed), it’s been shown over and over again to reduce opt-outs, double engagement metrics, and generally produce more engaged email subscribers.

Have you ever calculated the churn rate for your email list? What was it? Feel free to brag about your amazingly low list churn rates in the comments.