The humble hashtag is now becoming firmly embedded in our culture; if you speak to any teenager, it’s likely that they’ve used the word hashtag in a phrase to cement its meaning. But the hashtag does of course have a much better use than just as a part of popular culture, it can be a very useful tool when it comes to digital marketing.

The use of hashtags was first suggested back in 2007 by Chris Messina, but it didn’t really take off until October of the same year when Nate Ritter used it on Twitter to report on the San Diego fire. #sandiegofire

The rest, as they say, is history and now the hashtag is used extensively across social networks to promote an event, conversation or business. However, the hashtag is also extremely overused at times, with some people opting to hashtag every word in sight, making for very irritating reading. For the most part, Twitter remains the home of the hashtag, although you can now use them on G+, Facebook, and other networks.

How to Hashtag Properly

There are various tactics that you can employ when using hashtags and these can help to promote products, events, and a business on Twitter. We now have trending hashtags appear to the left of the Twitter feed so that we can see what’s popular, getting your hashtag there is pretty rare unless you’re one of the big brands.

However, you can strengthen your brand by coming up with a catchy tag that will stick with the minds of your followers. For example, say that you have a bakery that is well-known for creating imaginative cakes. You could create a hashtag that illustrates this and encourages followers to share their own cake designs such as #CreativeCakes. In order to get your tag ‘out there’ you could first hold a Twitter conversation using your hashtag and keep it running for a week to test the response.

You can also include the tag on all of your business stationary; put it in your email signatures, on brochures, and footers and of course on your website and social media images.

How Many Hashtags Should You Use?

In general tweets, two tags suffice, especially since you don’t have a great deal of room to play with on the site. Remember you have to include a link too and there’s only so much you can say in 140 characters.

The mistake that a lot of people make is hashtagging #every #single #word. Not only is this irritating, but it looks unprofessional and gives the appearance that you have no idea what you’re doing. You may not have, but it’s better not to broadcast that to the world. I’ve found that an effective way to construct a hashtag is also to capitalise the beginnings of words. This makes it far easier to read and ensures that your meaning doesn’t become lost in a jumble that has to be deconstructed by the reader.

Think about which words you want to hashtag, or why you want to use a certain word before posting. In general posts, especially when it accompanies content, then you’ll want to refer to what the content contains.

So for this blog post, let’s have a look at the title and decide what tags would be most likely to accompany it.

If I chose to use that particular tag, I would most likely leave it at that as it’s a long hashtag; however, this also means that it may not get found, so I could also opt for just #SocialMedia and put #DigitalMarketing alongside it.

However, if you really want to be effective when using hashtags, then it’s better to carry out some research to see what’s popular and what’s trending. There are a few sites that you can use to do this; I’ve used hashtagify.me and searched for social media.

As you can see, the term is a popular one in itself, but it’s also already associated with marketing, Facebook, Twitter, news, and #SMM, which of course stands for social media marketing. So in this instance, you might prefer to use the lesser searched for #SMM so that you don’t get lost in the noise if you tag with just #socialmedia.

You can also use sites such as hashtags.org to search for trending topics, and you can jump in on the action by using a popular tag to join a conversation that’s already happening. Obviously, if it’s in your niche then that’s perfect, but don’t feel restricted to just talking within your niche because you could be missing out on opportunites.

Some companies think that it’s a great idea to attempt to piggyback off the success of others by using the same hashtag as other, more high profile, companies. I wouldn’t recommend doing this unless you’re actually joining that company’s conversation, as it’s likely that you’ll alienate those followers who believe they’re conversing with the company in question. It’s never a good idea to hijack a hashtag, although of course the public do it all the time to make their feelings clear about a good many things when it comes to big brands. 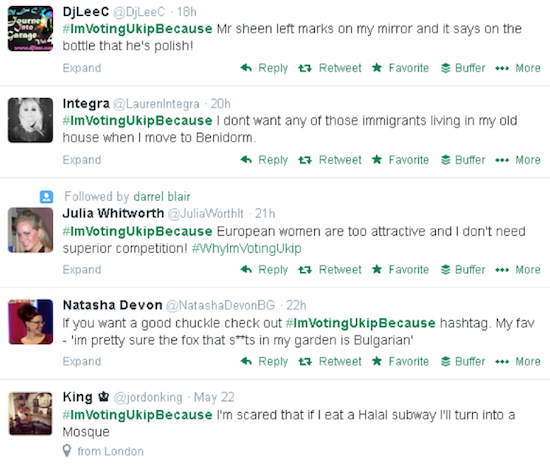 McDonalds have been a victim of this and in the UK this week a good (and frankly hilarious) example is the hijacking of the UKIP hashtags #WhyImVotingUKIP and #i’mVotingUKIPBecause. The tags generated an outpouring of anti-racism tweets that filled up my Twitter feed for the entire evening; I didn’t see even one which was actually serious. A great example of when hashtags go wrong, at least for those that intended to gain a more serious response from actual supporters anyway.

Hashtags are a powerful way to get picked up in social search and to strengthen your brand. Get creative and come up with some brand hashtags that can be used as part of your marketing and make sure that you tag brand tweets with it and before you know it, you’ll have one that makes you instantly recognisable on social.

Make sure that you research and learn to tag your content posts more effectively and it’s likely that you’ll see a better rate of engagement, which leads to more traffic and helps you to build a community with your followers, who all being well, go on to become loyal customers.