The dust has barely started to settle after last week’s election. The results aside, we decided to see how the two leading presidential candidates used email in their campaigns. How often did they send emails? How did those emails encourage subscribers to vote? And most of all, were their email marketing campaigns as exciting as the presidential campaign in general?

According to DMNews, while Clinton had led massively in all email metrics and Trump’s email lists had been plagued with spam at times, Trump’s final two weeks saw a significant improvement. Both candidates upped their game during the last weeks of the campaigns and we also noticed that as subscribers. Yes, we decided to sign up for both candidates’ newsletters some time ago and see what they had to offer to their audiences. Here’s what we observed.

From the start of the presidential campaign, both candidates used email marketing extensively. Both Trump and Clinton sent newsletters every day, sometimes even twice a day.

Still, finding a sign-up form on Clinton’s official website was not an easy task. The option to join the subscription list wasn’t placed on the home page, but rather hidden on other pages of the Hillary for America website. This required more engagement from her audience who wanted to join the email community as you needed to actually go and look for the form.

This was much easier on Trump’s website, where it was placed in a conspicuous spot on the home page, inviting visitors to subscribe just as they entered the site.

The sign-up process took two steps in both cases. During the first step, only the email address and zip code were required. The second step was much more complex and most of the required information was obligatory to finalize the subscription. Apart from first and last names, city and state were also required. This is understandable, as it probably helped the campaigns segment their list, predict support in individual states, and plan ahead. Although, as you’ll later see, the campaigns didn’t necessarily use it for personalizing email content.

Both candidates sent a thank you message that also served as an encouragement to donate to the campaigns.

Asking for donations seemed to be a higher priority for both Clinton and Trump. The official websites of the two candidates contained two forms: one for newsletter subscription, and the other one – much more exposed – for donations to the campaigns. Apart from credit card details, the required information included industry and company. Clinton’s website even displayed a special pop-up window: 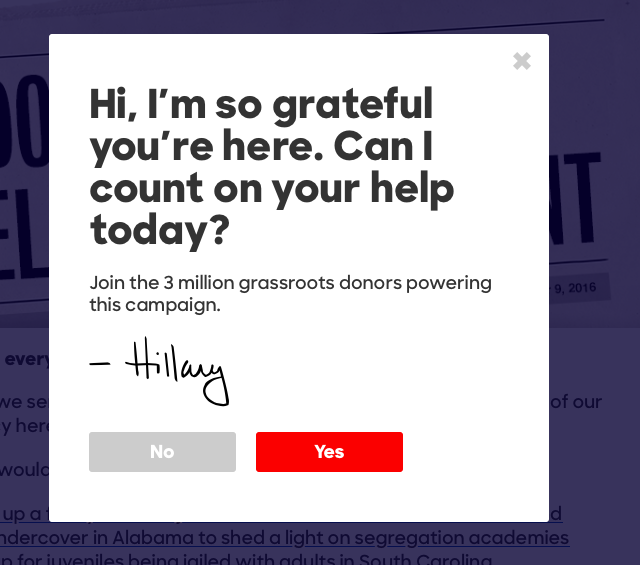 Are you sure you want to unsubscribe?

In both candidates’ newsletters you could find the standard unsubscribe footer. But at this point, there were a few differences between the two email marketing strategies.

Hillary Clinton’s campaign gave you a choice: the subscribers could either unsubscribe completely, or opt for decreasing the frequency of the emails they received.

If they decided to unsubscribe, the Democrat candidate tried to convince them to stay. The unsubscribe link took them to a page that explained why they should keep in touch with the campaign team. It included a bunch of links to articles about Clinton, and a popular GIF of Hillary’s shoulder-shimmy, while the subscriber had the chance to change their mind right to the very end.

By the way, an appropriately timed animation also appeared on the 404 page:

On the other hand, Donald Trump’s unsubscribe page was concise:

A text from the (future) president

Both candidates offered the opportunity to receive texts with information about the campaigns – and even offered a way to donate by phone.

More differences in communication strategies could be seen in the candidates’ emails themselves.

Clinton’s campaign team didn’t use personalization, and most of the messages started with “Hello, Friend”, even though you had to leave your name in the sign-up form. Donald Trump, on the other hand, greeted subscribers with their names in almost every email. That was about it when it came to email personalization, though, as far as we noticed, as the emails didn’t refer e.g. to the city declared in the sign-up form.

The graphic side of the election

Neither of the candidates’ newsletters turned out to be a design masterpiece – their campaign teams chose simplicity and didn’t create email templates that would allow to quickly identify a given candidate. Most of the emails from Clinton and Trump were plain text messages that first and foremost called for donating to the campaign. These contained CTA buttons that stood out, trying to convince the subscribers to donate. Some of the emails had multiple buttons, each with a different amount. 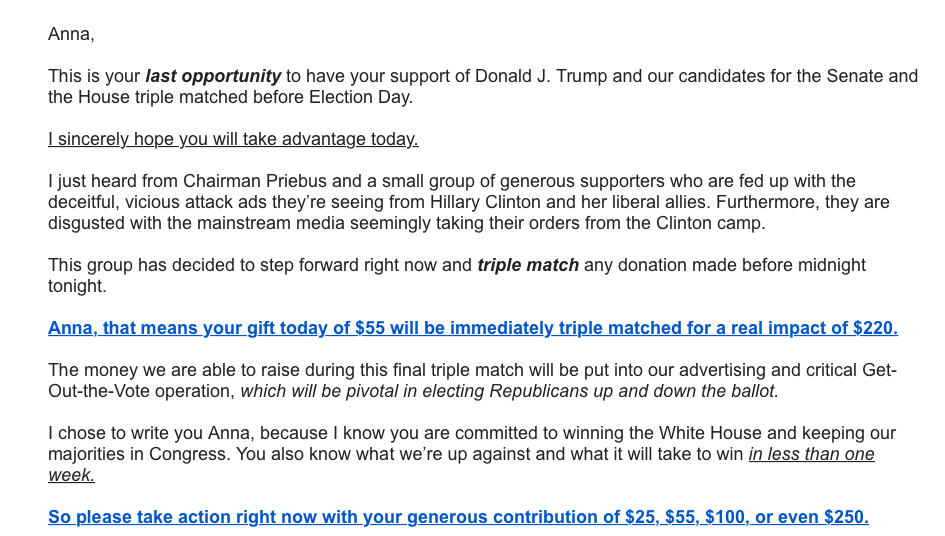 The emails often lacked a preheader, and Hillary Clinton didn’t even use a consistent header that would be specific to the sender. Trump’s emails, on the other hand, contained headers with the Republican campaign slogan Make America Great Again!

It’s worth noting that the candidates’ emails tried to catch their subscribers’ eyes with varied From fields – the senders displayed with the main email address included politicians and activists supporting each of the candidates.  For the Democrats, these included Michelle Obama, while Newt Gingrich as well as Trump’s son, Eric, signed off on the Republican candidate’s emails.

Fragments of emails from the candidates, and their From fields.

Around a week before the election, during the final phase of the presidential campaign, both candidates clearly intensified their email activity, trying to encourage people to vote for them and donate to their campaigns. Clinton offered her loyal donors VIP tickets to the election night in New York, and that particular email, as opposed to the previous plain text ones, included images that explained why people should choose her. Donald Trump suggested he’d display the names of 2000 most generous donors on a special plaque.

And the closer the final decision time was, the more interesting the emails got. Both Trump and Clinton sent more HTML emails, standing out from what their teams had been sending before, with Donald Trump’s emails much more aggressive in character:

A fragment of an email from Donald Trump’s campaign team, sent on election day 11/8/2016. 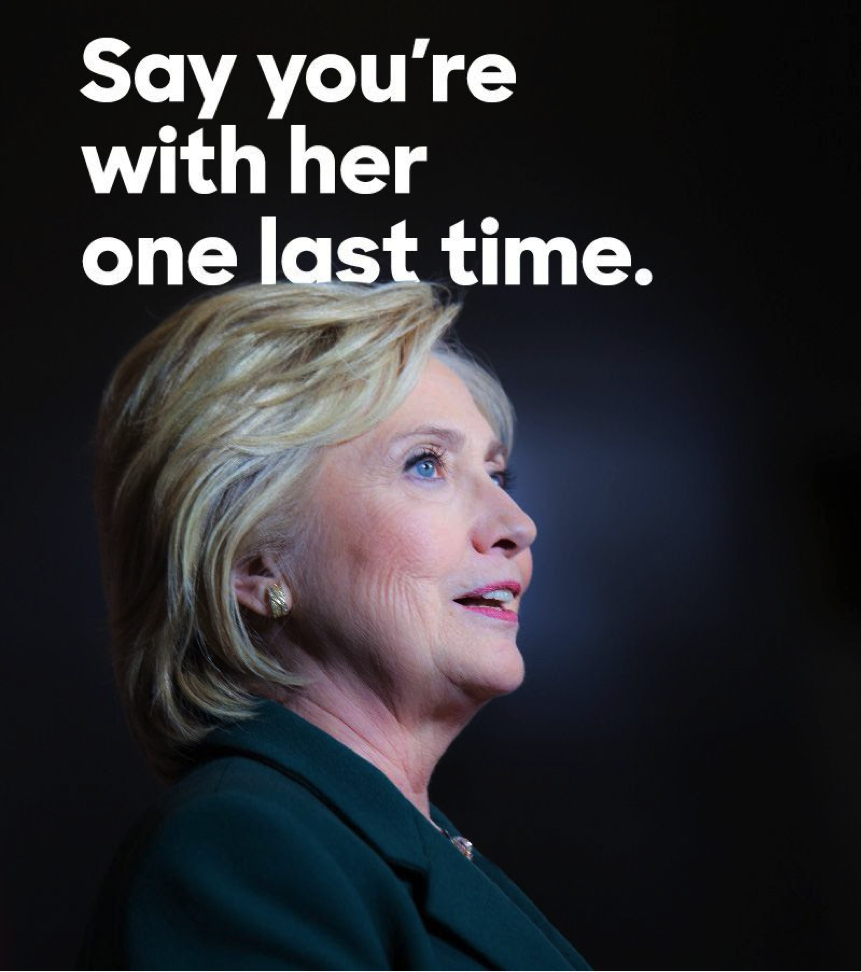 A fragment of an email from Hillary Clinton, sent the day before election

A week into the election Donald Trump also used email marketing for another purpose – his team asked their subscribers to state their opinion in a survey which asked about social and political subjects he should include in his last campaign pitches.

A few hours before voting began, the politician decided to make it easier for his audience to vote and sent them an email which included a link to the polling location list.

A fragment of an email from Donald Trump

And the rest is now history…

The short comparison above confirms that both candidates engaged in regular email marketing communications with their audiences – from the way they subscribed to their lists, to subscription confirmation emails, to unsubscribe processes, to email content.

Up until election day, the main focus was fundraising for the campaigns, although in the campaign’s last phase it was all about getting people to vote.

All politics aside, did you notice anything interesting about the marketing tactics used in the campaigns? Or with the email marketing of third party candidates Gary Johnson and Jill Stein? Please share your thoughts in the comments.