Do you know what it’s to spend 10.000$ on a guilty pleasure, without even thinking about the financial consequences of such a splurge? Yep, me neither. But approximately 30 million people in the world wouldn’t have any problem with answering that question.

Although some may claim that success and money do not always go in pair, the truth is that most communities associate being successful with getting rich.

I bet that at least once in your lifetime you dreamed of finding your photo on the cover of Forbes magazine. I wish I could afford really long holidays in some exotic place; I work so much and I still don’t have enough money… what’s my problem?!

Sounds familiar? Do you think there isn’t anything you can do to get closer to this goal (apart from working hard and enjoying things you do in life, obviously)?

Well, here’s lesson one: be patient – because I will not provide you with one of those “How to earn 10000$ in 30 minutes” kind of recipes.

Lesson two: sometimes it is good to be a weirdo – don’t be afraid and behave a little different than others. Statistics show, it pays off to be outside the box!

That being said, hopefully some of successful people’s weird habits listed below, will become an inspiration and motivation for you; then, you will be able to change your plans for the nearest future to benefit you! Needless to say, enjoying what you do for living is the base of becoming successful. Is there anything else you should do? American author Tom Coroley spent over 5 years on studying “poor and rich people’s habits.” This post presents a few of his conclusions.

Below you can find six examples of what can you change in your life to become successful. Let’s get started!

This rule may seem painful for the night owls, but the mechanism is really simple – if you wake up early, your day would be longer. 3 hours is enough time to eat a nutritious breakfast, drink coffee, exercise a little, and take care of yourself – both mentally and physically. It may help you clean your mind and empower you before getting down to the grits of work.

It comes to fruition in the long run, because you get extra time to respond to all your messages, write several emails, catch up with neglected duties, or prepare a report for your boss. There are many ways you can effectively spend this time on.

Need a trigger? John Girsham, author of a bestseller, “The Pelican Brief”, used to work as an attorney. When he started writing his most famous book, he used to wake up everyday at 5 a.m., then go to the office and spend 3 hours in the morning on writing the novel. After 9 o’clock, he got down to fulfilling his regular duties. This way, he spend over 10 000 hours on writing a book.

2. They don’t watch “Keeping up with the Kardashians”

Or at least not so much 😉 According to Business Insider’s statistics, only 23% of successful people regularly watch reality shows or TV in general, and for less than 1 hour a day. Sitting on the couch is a rather passive form of spending time –  successful people tend to enjoy every active moment they can catch during the day. Therefore, they try to spend their spare time on physical activity such as fitness, jogging, swimming, and other kind of exercise.

Influential people really care about their health and body, and calorie intake (auch!), because they believe that good health influences success and a self-assured mind is a consequence of a well-kept body. However, it is not only strong will and this life philosophy; successful people are sometimes too busy during the day to even think about swapping into coach potato mode to flip through TV channels.

Same goes for the Internet and watching cute kittens or baby goats on YouTube – I agree that it may be addictive, but remember to stay reasonable while spending another hour in front of the computer screen keeping yourself superficially busy.

…. for pleasure. Take a look at these statistics from this Infographic: 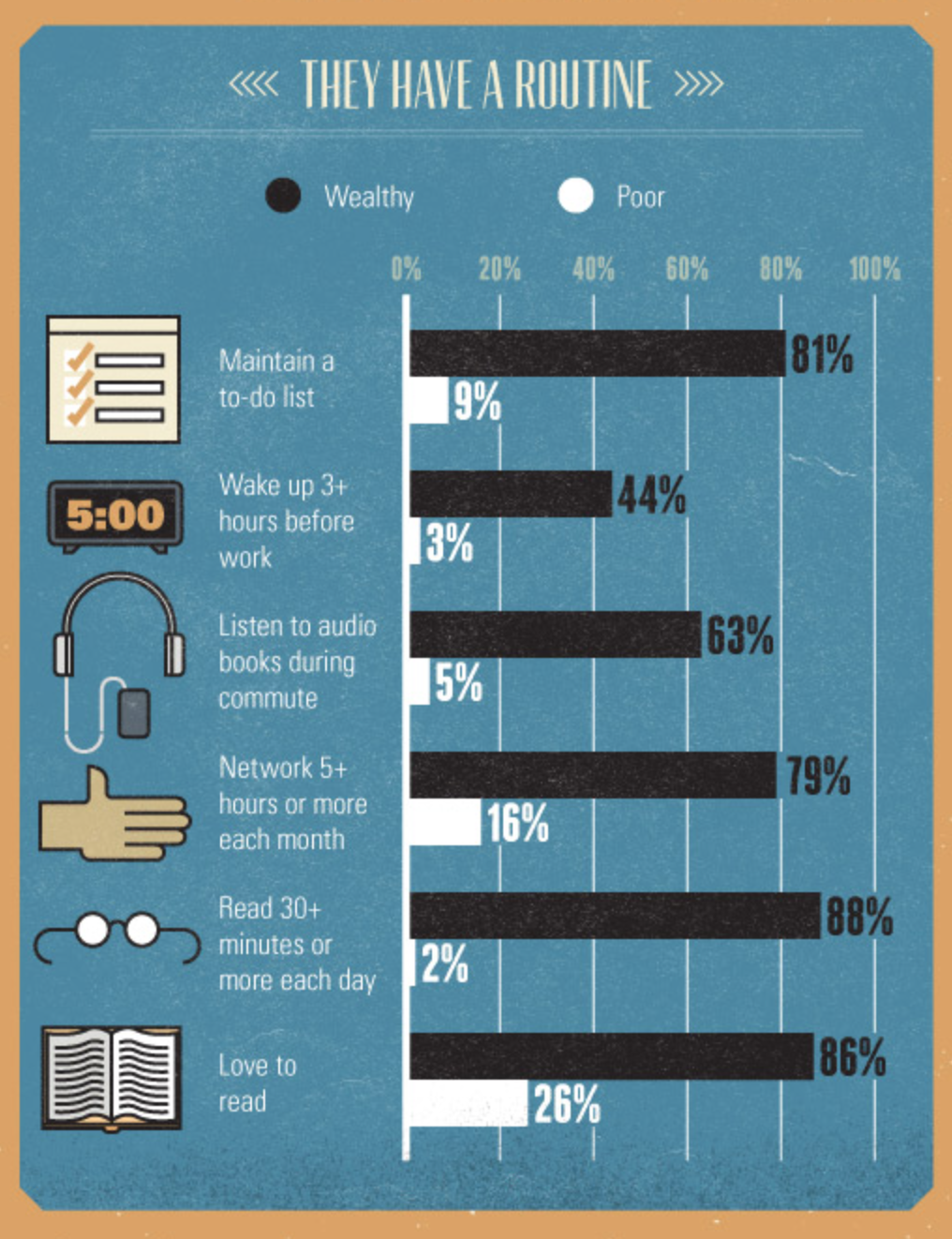 Successful people read really a lot, but they focus mostly on topics that may occur helpful in their self-development. It does not have to be a complicated scientific book about black holes and Einstein’s theory of relativity. Follow their example – the wealthy are reading articles about interesting matters, often connected to their area of work.

They are eager to learn at all times; this is why they spend their time on learning new skills and widening their knowledge about the world. You do not have to instantly say bye-bye to “Game of Thrones” or any other novel. If ditching your favourite novel seems to be too difficult, try to work out a compromise with yourself: every other evening read a non-fiction article. Trust me, it can be as pleasant as another page of Stark family adventures.

Have ever thought about audiobooks? Coroley’s studies prove that 63% of wealthy people listen audiobooks during commute to work. So if you really try, each minute can be a productive one. You can learn a new language or listen to market news during your everyday walk to the office. Let it become your everyday routine. It is really simple and impressive (you can propose another topic for small talk in the office kitchen, imagine your friends face when you start talking to them in Spanish). Think outside the box – who said that learning can’t be pleasurable?

According to success.com, over 77% of those struggling with financial difficulties, are victims of regular gambling. The rich and famous believe that it is not luck that determines their future – it is rather the considered manner of life and actions. Successful people know that they are the ones who determine their path in life – and not the croupier’s bad mood or 6 randomly chosen numbers.

Try to cross out such words as “bad luck”, “lottery”, “faith” from your dictionary, and stop complaining when it comes to career matters. In other words, wealthy people don’t believe in the American Dream and success coming out of nowhere. But they are fully aware of the difference between gambling and risking, and they treat that second idea rather as a challenge than difficulty.

Speech is silver, but silence is golden – this cliché works perfectly well in the financial field. Successful people control their emotions, they know that not every single feeling or opinion has to be expressed in public. Be aware of the fact, that too much of emotions can destroy not only a private relationship, but also interests within your business network.

Be sure to make double who and where you are speaking to before stating private opinions in business environment, for example if you love eating meat, your future investor may be not happy to hear that you think of vegetarians as posh-hipster weirdos. There is only one chance to make a first impression – do not ruin it with something unimportant.

The biggest “emotional enemy” of your success is the fear of loss or making a mistake. The best way to deal with it would be by transforming depressive feelings into positive ones and beat it with action. It is time to face the truth – risk and mistakes are a part of human nature, everybody does it. Constantly keeping yourself in-check, asking “what if” will not change anything, it only leads to procrastination. If you act in such a way you are not anticipating, only prejudging the situation. After accepting this fact, making decisions will be much easier.

If you want to be successful, you should also fight with a fear of meeting new people. Apparently, as the research shows, networking and volunteering have much importance in becoming successful. However, it is important to make valuable connections – it’s not the quantity that matters, but the quality. Remember that during your career you will need friends and family, but also reliable employees and business partners. 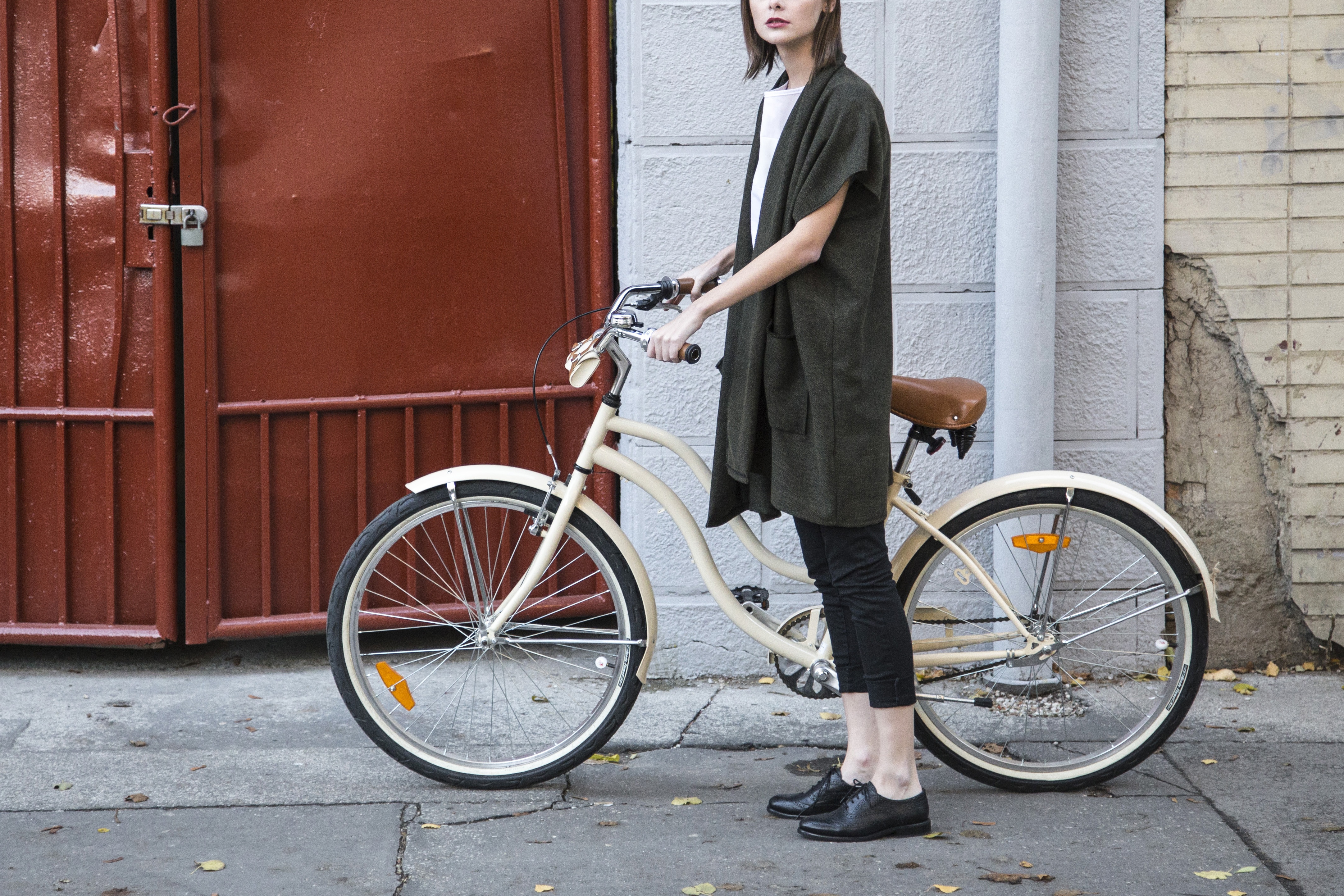 Sounds really strange, doesn’t it? But do you really know how to breathe in a conscious manner? Wealthy people put much notion into concentrating on their health and body, because they know that success also comes with the less pleasant ugly side – where you are under strain 24/7.

During everyday rush the awareness of being here and now is very important – yep, you got stuck in this traffic jam, shop queue, or during a boring meeting. But still you are not in “tomorrow I have to finish the project” or “6 pm is the deadline” – lands. Be focused on your breathing, read and learn how to deal with stress (maybe audiobook in car?), and remember that success relies on your job, but also on a fulfilling personal and family life.

From Rags to Richest

What you do today really matters, though, you probably will not see the results of your activities tomorrow or next week. Unfortunately, success is not built in a day – much like Rome. Compare it to being on a diet – you will not suddenly get fit after one day of self-denial. Success is a constant process, based on changing the way you live.

The example of 30 million wealthy and successful people proves that thanks to little changes – one day you can join the hall of fame of successful people. Let us know how you keep you healthy-success mentality going in the comments below… and see you on the cover of Forbes! 🙂