Ever wondered if you should include a first name field in your opt-in forms or not? Some marketers use it, and some don’t, but there’s actually considerable dispute about whether the name field helps or hinders long-term list profitability.

While there are no definitive answers either way, the decision whether or not to include a first name field is definitely worth some thought. The opt-in form is the very first step of a new subscriber’s journey with you. Even a 10% change up or down in opt-in rates can mean a significant difference in profits later on.

Many popular sites on the web don’t ask for first names in their email opt-in forms.

The case for leaving the name field out

You’ve probably heard that adding fields to opt-in forms reduces opt-ins. Generally, it’s true. The principle behind too many opt-in forms is called “friction” by website conversion gurus. You don’t want any extra friction in your forms, so by that logic, you’d leave the name field out.

Another reason to leave the name field out is that some people won’t put their name in, even if you require it. They’ll put some filler text in, like “I don’t want to give my name” or “nobody knows”. This is not so good for you, because it means every time you send what you hoped would be a personalized email, you’ll instead be sending an email to “Nobody Knows” or “I Don’t Want To Give My Name”.

An email with the subject line of “Nobody Knows, Special Deals for You” probably won’t incite your subscriber to click. It will also remind them that you are, in a sense, faking a close relationship with them, when all you’re really doing is inserting a database field.

If you have been collecting first names, but aren’t sure you want to continue doing it, this issue with fake names is actually an opportunity. Go check the list of people who have signed up for your list. If you see a lot of names that are clearly fake, it might be a tip that the name field may not be delivering as much as you’d hoped.

At the beginning of 2019, we've conducted another study on this topic and saw that emails containing personalized subject lines observed higher average open rates by 22%. However, we didn't see a significant difference in the average click-through rates. The two types of subject lines varied only by 0.08 percentage point.

You can read more about these results in the Email Marketing Benchmarks report.

There is another, slightly less pressing reason to leave the name field off: To simply grow your list as fast as possible. For some marketers, building a big list fast is priority #1, and so if list size is all you care about, then leaving the name field out is a reasonable choice.

There is one final reason to leave the name field out: Because you can ask for it later. There is a fancy marketing term for this process of slowing acquiring more information about your subscribers – it’s called “progressive profiling”. It takes a little technical know how to make it work, but you can do it with a GetResponse account, provided you can get your subscribers motivated enough to fill out another form.

Progressive profiling is probably not something everyone will want to do, but it is another reason to leave name field out. You can always get more information from your subscribers later on. All you really need to continue the conversation is their email address.

The case for including the name field

We’ve got a pretty long list of reasons to skip the name field, but don’t be too hasty about leaving it out yet. Personalization does generally improve results. Not in every study, as we saw with the GetResponse emails, but generally, yes, personalization does lift response. The most quoted example of this is the 2013 Experian Email Marketing Study, which showed personalized emails generate 6 times higher transaction rates. With a lift like that, who cares if you get 10% fewer opt-ins?

There is one more thing to keep in mind when you hear “personalized emails”. The personalization may be something beyond peoples’ first names. Personalization can include modifying emails so subscribers see products from categories they’ve bought from before, or email content tailored to their zip code, or other data pulled from their browsing history. In other words, there’s much more than just a name to personalization.

That said, there’s still plenty of research that shows even using first names in the subject line or the greeting of an email can lift response. 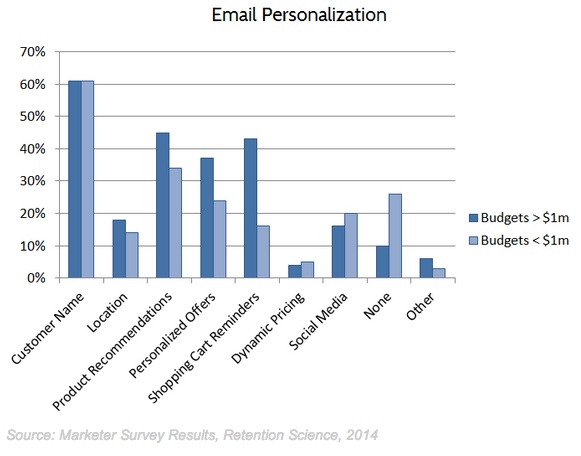 Most ecommerce sites use some kind of personalization. 60% use customer names. Graph from Retention Science.

What we really want to know is do the benefits of using a name for personalization outweigh the drawbacks of adding a little more friction to the opt-in form? Let’s try to break this question down so we can more easily answer it.

Most sources say that adding the name field to an opt-in form suppresses the opt-in rate. How much does it suppress the opt-in rate? It depends who you ask.  Unfortunately the figures shift so much from source to source that there is no one statistic I can give you that you can take and apply to your business.

The only real way to know is to test. I know that’s not what most of us want to hear, but it’s the only responsible answer. Some marketers see no reductions in opt-in rates with the name field included. Others see 10% drops, and here and there people report significant drops in opt-in rate with the name form included, like 20% or more. It all depends on your business.

How much of a lift can personalization really deliver?

We’ve reviewed the GetResponse study earlier, which saw a 26% lift in opens. That’s fairly consistent with other findings, like a report from Adestra that saw a 22% lift in opens when names were added to subject lines. MarketingSherpa also did a series of email tests with and without personalization in the subject lines, and saw a 17.63% lift.

Of course, your list is going to be a bit different, but at least a 10% lift from personalized subject lines is a reasonable expectation.

Now, the next question is: Will you see the spam complaints and unsubscribes that showed up in the GetResponse report? You might. But consider that there was some good news for personalization in the GetResponse study. If marketers used people’s names only after a few email warm ups had been sent out, they got fewer unsubscribes. Apparently, many of the unsubscribes were coming from the first 1-2  emails people got after signing up. Perhaps it was too early in the marketer/subscriber relationship for first names, or people didn’t recognize the sender very well, and thus felt being on a first name basis was a little false.

Unfortunately, this is one instance where you’re going to have to test for yourself. There isn’t enough data either way to prove that collecting names in email opt-in forms is a best practice, though it does seem that there are more cons than pros for adding the name field. Still, for some businesses, adding the name field works great. For others, it may end up being a wash, or it could end up even hurting results.

What’s your experience with including the name field in your opt-in forms? Do you have any test results that show it’s worthwhile? Let us know in the comments.