Do you really want to succeed as a blogger? Then post this quote from iconic copywriter and marketer David Ogilvy on your wall:

“When you have written your headline, you have spent 80 cents out of your dollar.”

Headlines make or break a post, an ebook or anything else they’re attached to. They’re especially critical on social media. Used properly, they can be magnets for search engine traffic.

While a bad headline can kill a post, the upside is that a little time spent on improving headlines can be extremely rewarding. The other good news is that because headlines are so important, there’s been a ton of research done on how to hone them. Smart content creators continually test their headlines and often report back with their results, so we have that data, too. Here’s just a few of the most effective tips all that research has revealed. 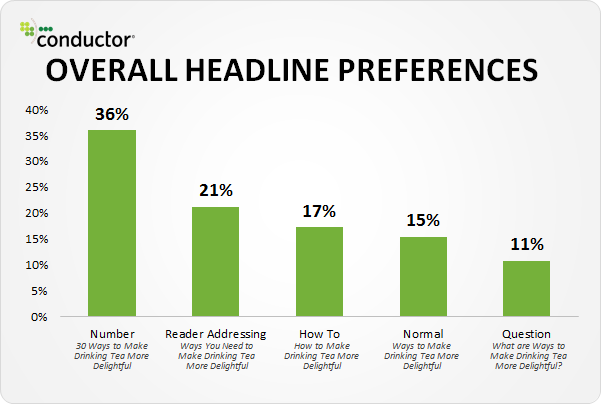 Blog post headlines that start with or use numbers are called “listicles”. While listicles get a bad wrap sometimes, there’s no denying they work. This chart from BuzzStream and Fractl shows how different types of blog posts perform in terms of sharing. Listicles crush any other text format. They usually beat out even videos. 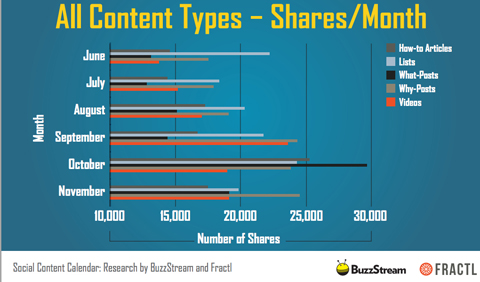 Want to kick your listicles up a notch? Use odd numbers, which have been shown to give a lift. Also consider using super specific numbers, like “117 Ideas” instead of “100 Ideas”.

You could take it even further: Try “117 ½ Ideas”. I have never seen a half symbol (or an emoji) used in a listicle title, but doing something for the very first time is the very acme of being creative.

Listicles leverage the power of specificity. “17 Ways to Run”, is more specific than “How to Run”. It narrows our focus. The specificity makes it sound just a wee bit easier. Our judgmental, lazy, impatient reptilian brains love making things easier

3) Talk to them directly.

Want to know one of the most fundamental copywriting tricks ever? The one word ace copywriters always use, and use heavily?

Adding “you” to headlines, social posts, blog openings, anything at all will give you (aha!) an edge.

For more verification of the power of “you”, consider this list of the most popular words in viral headlines Kevan Lee put together for a Buffer post. “You” is the first word in the list that isn’t an article.

Yes, I know you only need one. But writing 25 headlines will make you come up with a better headline than if you only wrote one.

This is a trick from Upworthy, a viral content powerhouse. Upworthy makes their writers craft 25 headlines for each post they write. Does that seem like overkill? Have you seen how crazy viral Upworthy posts are?

This trick works. It separates slacker bloggers from the elite. You can also fudge and just write ten headlines, or maybe 15 or 20 headlines. I’m a bit of a slacker myself – I usually write about 10 to 15 variations on a headline. It doesn’t take much time and it’s actually kind of fun. In terms of time investment, writing a slew of headlines is one of the best ways improve a post. 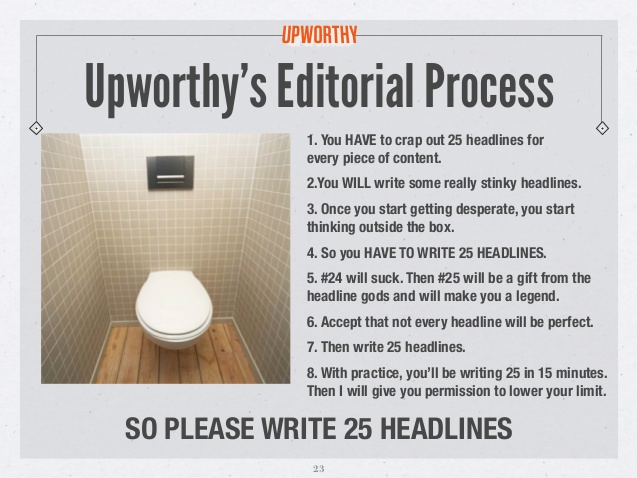 A slide from Upworthy’s Slideshare, How to Make that One Thing Go Viral

Another way to say this is “Surprise Them”. However you say it, try to write headlines that are familiar enough to be recognized in the stream of content, but provocative enough to suggest you’re offering something new. With 2 million blog posts being written every day, we have to figure out something new to say, or figure out a way to say something old in a new way. Or we’re pretty much forgotten already.

There are a bunch of ways to add interest or surprise. Here are just a few:

Is this too formulaic? Possibly. Is it almost always effective? Yup.

6) Use the classic five from journalism.

Who, what, where, how and why are power words. Use them in your headlines. They have built the structure of articles ever since newspapers hit paper. They work for blog posts and other online content, too. The power in these words borrows a little from our tip about being specific. Those five question words narrow things down fast.

7) Use a headline analysis tool.

As you may know, there are also some online tools that will score your headlines based on headlines “rules” and best practices the tool creators have applied. The two most popular headline analysis tools are CoSchedule’s Headline Analyzer, and the Advanced Marketing Institute’s Emotional Marketing Value Headline Analyzer. Both tools are good, but they also have their limitations.

Here’s how both tools rated the most popular posts of 2014 from Buffer, Moz, Entrepreneur, LifeHacker and Psychology Today: 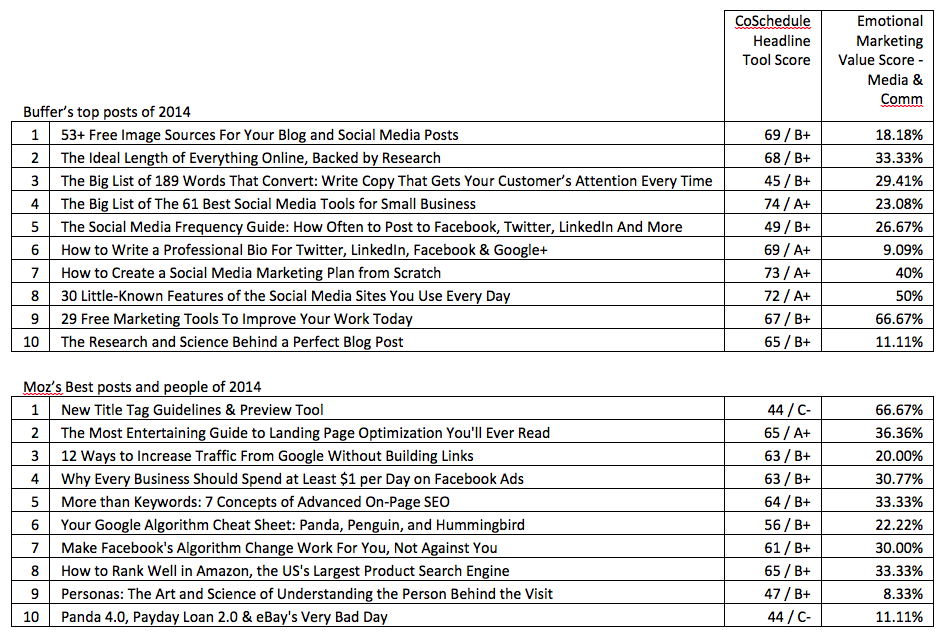 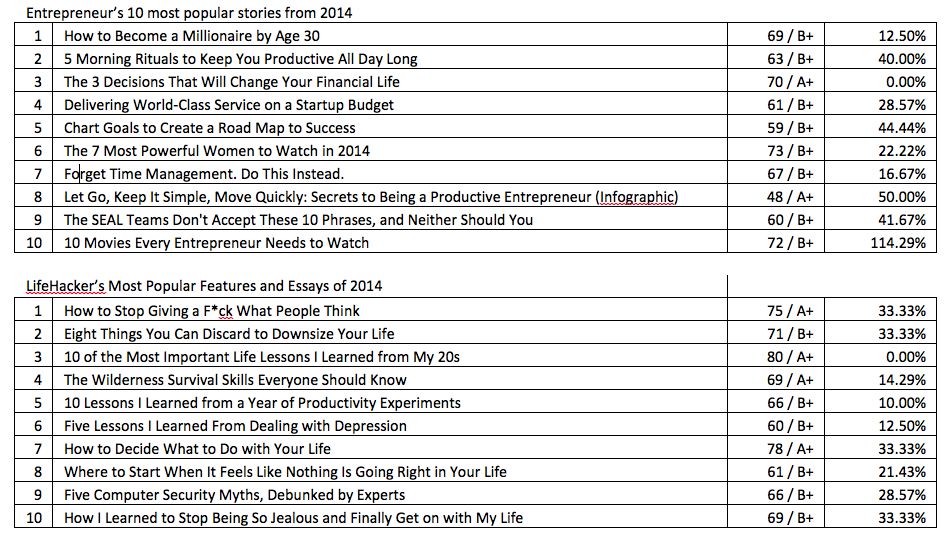 What the scores mean

The CoSchedule number is an overall score drawn from a number of calculations, and informed by CoSchedule’s own analysis of over a 1 million headlines. The grade refers to the headline’s word balance, “An analysis of the overall structure, grammar, and readability of your headline.” CoSchedule gives a bunch of other feedback about your title like SEO length, word count and more. 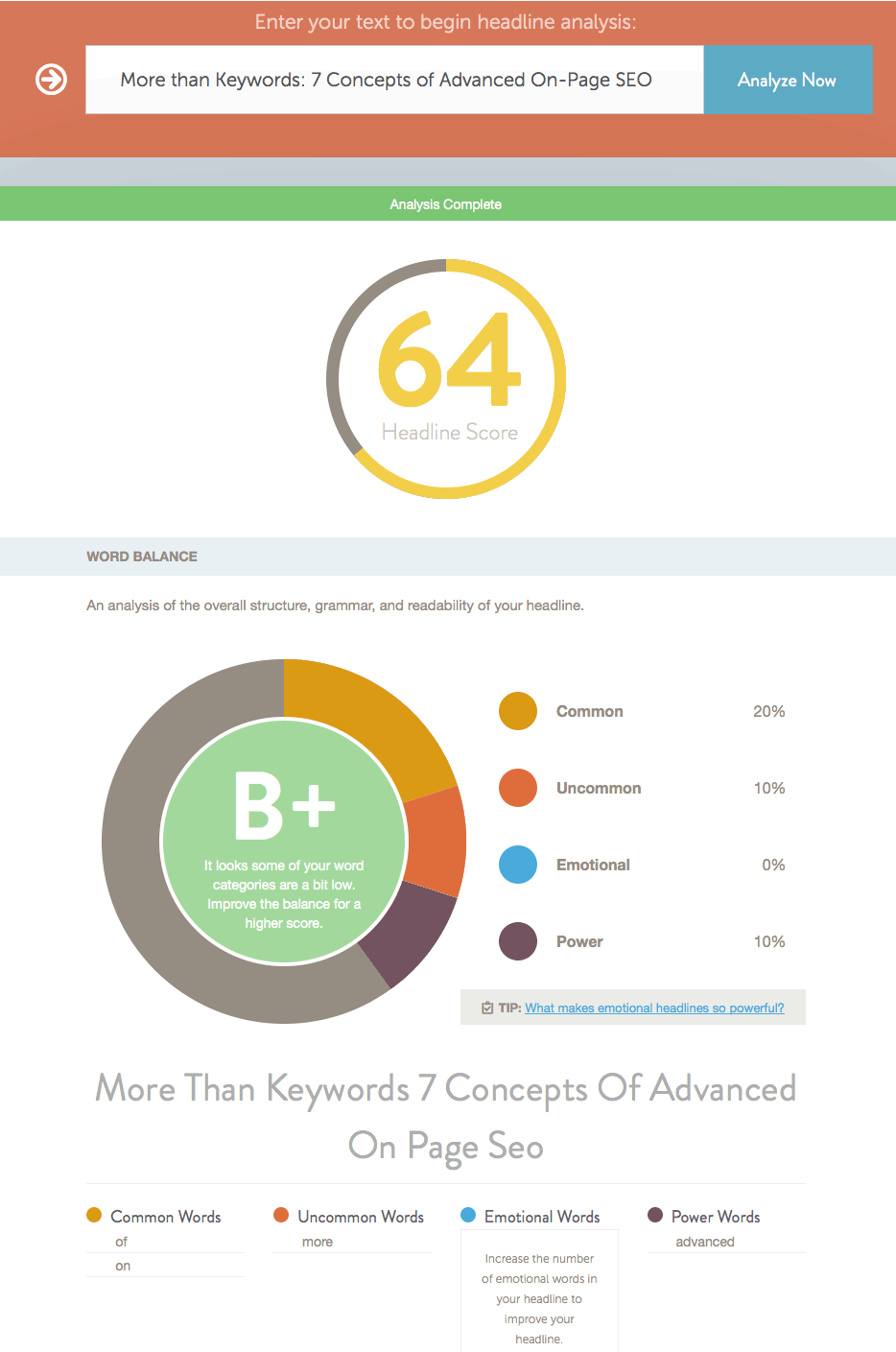 The Emotional Headline Analyzer tool gives a percentage that’s supposed to be from zero to 100%, though one of the titles I tested came back with a 114.29% EMV.

As the tool states, “for comparison, most professional copywriters’ headlines will have 30%-40% EMV Words in their headlines, while the most gifted copywriters will have 50%-75% EMV words in headlines.” 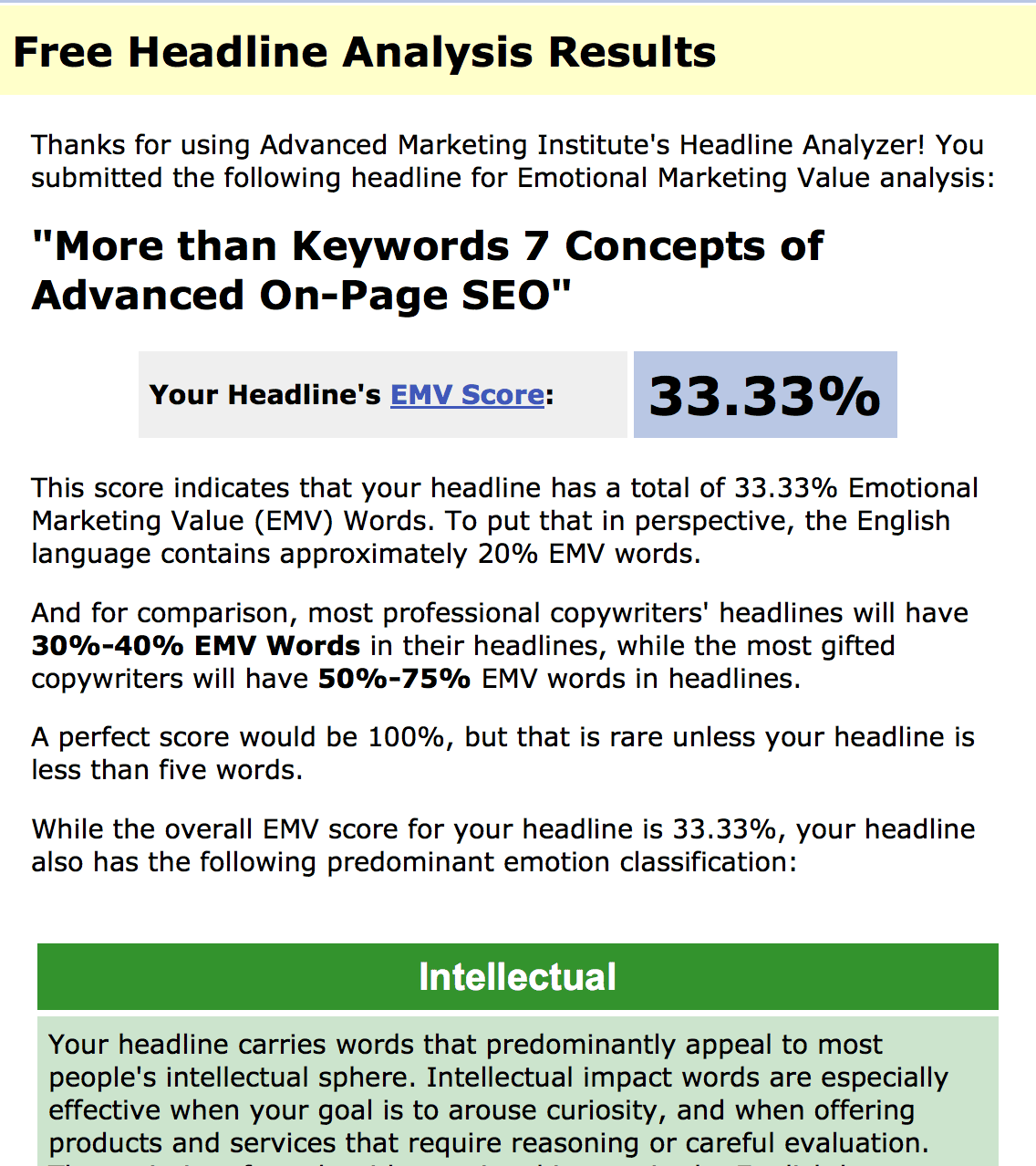 What’s the most immediate takeaway from seeing the scores of these top-performing posts? It’s that you should take what tools tell you with a grain of salt.

Most of the top performing posts did okay with their headline tool scores. Many of them came in around mid-60s for the CoSchedule tool and around 20 to 40% for the EMV rating.

Several of the principles behind our headline hacks can be seen in the headline lists. Numbers, aka listicles, are sprinkled throughout for every site. Articles that start with “How” and “Why” appear a lot. There’s also many examples of headlines sporting the element of surprise.

What trends do you see in this list of top-performing posts? Tell us about them in the comments.