Reddit. It’s not everyone’s cup of tea, but it certainly has sway in the social media arena. Those who love Reddit, love Reddit. Those who don’t are pretty hard to convince otherwise.

But, I truly believe that education can make changes for the better all around the world – and social media marketing is no exception. Take a look at these statistics from statista: 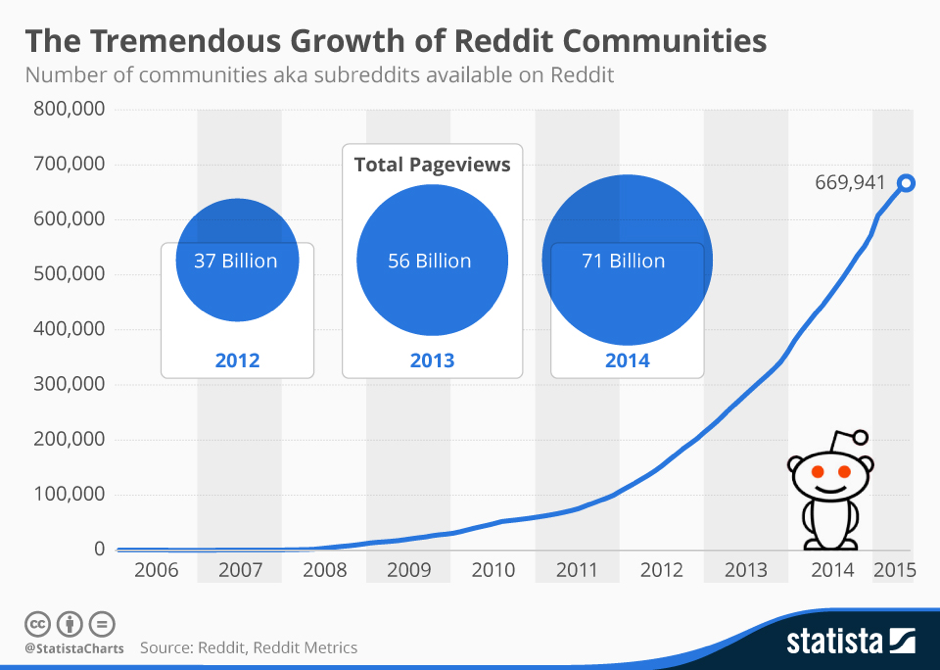 If you’re unsure about Reddit, or perhaps have written it off as being too complicated to bother with, then before we go on I urge you to read the late, great Kerry Butter’s Post ‘A Beginner’s Guide To Reddit – “The Front Page Of The Internet”’ – published on this very blog just a few weeks ago. The post covers all the fundamentals including voting, redditquette, redditors and subreddits – so if you’re feeling a bit nervous as to how you should approach the platform, then equip yourself very quickly with this wisdom and you’ll be Reddit to go!

Ok, so, if you’ve read Kerry’s post, then you will have got the fundamentals of Reddit down. But, before we delve further into the realms of Reddit marketing, it’s pertinent that we first get to grips with the demographics of the Reddit market itself.

I want to turn to a blog post from Blue Fountain Media, which has very handily compiled some brilliant stats that get right to the crux of this matter. According to the Blue Fountain Media post – which garners its figures from an Ignite Social Media survey – Reddit is largely comprised of users between the ages of 18 and 34, who have a 65% chance of being male, and will typically be quite well educated (50% of Reddit’s community base has had at least some college education, while another 30% of users have a bachelor’s degree or higher).

How To Incorporate Reddit Into Your Next Marketing Campaign

Ok, so now we know who’s on Reddit, we can get into how we can build this platform into your next social media marketing campaign.

But, before we go on, I’d just like to highlight the following: Reddit users are notorious for rejecting any form of blatant advertising on the platform, and there are mediators that control subreddits with an iron fist. So, if you think you can just head over to the site and start promoting your products with gay abandon, then you need to think again.

And so, the question that this blog post is really trying to answer is this: How can marketers infiltrate Reddit, which is very explicit about its aversion to marketing?

Well, the short answer is quite simple – by embracing the platform as the informative, opinion-based, unique social sharing ecosystem that it is.

How do we do that? Well, that of course makes up the long answer, and is what shall be covered in the remainder of this post.

Become A Redditor And Deliver Value

So, say you’re in the flower business. There will be plenty of people on Reddit who are interested in flowers – but most won’t be in the flower business, like you. They will be discussing flowers, the seasons, the smells, the uses, etc. So, much like you would on your blog, you need to be joining these subreddits and contributing to the conversation. You need to share your expertise, offer advice to fellow redditors, and earn for yourself as may upvotes as you can.

Indeed, Reddit is one of the very best platforms on which you can establish yourself as a thought leader in your chosen field. Once you start getting the recognition in the subreddit as having something valuable to say, only then can you gently direct fellow redditors who want more information over to your blog. But, whatever you do, you can’t blow it all by offering a two for one deal on red roses for Valentine’s Day, as you will find yourself very quickly banned from the subreddit – top of the funnel (ToFu) stuff is ok on Reddit, but middle (MoFu) and bottom (BoFu) content is absolutely not.

/Videos is the 10th most popular subreddit on Reddit with just under 6 million subscribers. It also has 1.29% share of the traffic on the site. Indeed, 190 years of embedded video are watched on Reddit each month, and Redditors watch an average of 50-80% of total play time, according to the reelseo.com blog.

Standing out on any social network means going visual in 2016, and the same applies to Reddit. But, of course, you must remember that you cannot upload promo videos onto Reddit – or, rather you can, but you will be banned from the subreddit very quickly.

AMA (Ask Me Anything)

I hope by now I have managed to communicate to you that marketing on Reddit is a scary – even risky – endeavour to get involved with. One wrong move and it’s not your content that can go viral, but the backlash of negativity from thousands upon thousands of redditors who will come down on you like a ton of bricks for misusing their beloved platform.

And so it is with some hesitancy that I suggest to you to use the AMA feature on Reddit – it’s certainly gone wrong for some top companies in the past. REI’s CEO took to the site with an AMA, only be criticised by his own employees. Nissan encountered some trouble as well, when redditors accused the company of only taking questions that were planted using dummy accounts. It’s a bit of a minefield, to say the least.

But, that’s not to say that it can’t be done and done well – provided that you are completely up front with the Reddit community (and of course it helps if you’ve got nothing to hide in the first place). But, an AMA is a great way to gain some added exposure of your brand on Reddit. But, once again, you can’t just go swanning in there and setting one up without having already established yourself as a valuable member of the subreddit to begin with. You need to take your time and build up your reputation, and a genuine interest in who you are and what you have to say to the community. From thereon in you can draw a deep breath and go for an AMA session – but just be prepared that you may have to fend off some pretty tough questions. That, after all, is the spirit of Reddit, and you must be willing to embrace it.

Put very simply, Reddit marketing is not for the faint-hearted. You need to be prepared and methodical in your approach, and, above all, take your time in building your presence on the platform.

Indeed, perhaps the most pertinent advice I can give you is this: don’t be a marketer, be a redditor. Everything else should then fall nicely into place.

What are your experiences with Reddit marketing? Let us know in the comments below.